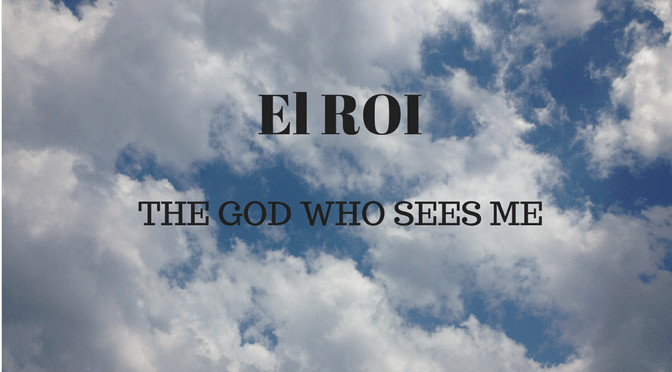 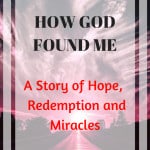 By Mariya Pypenko (Feit)
Translated and Written by Lisa Kravchuk

I was born into a family where my parents believed in God, but I did not serve Him and did not attend church. I was very involved at my school as a head-senior student, lead member of a Communist Youth organization and attended an atheist club where we stood against religions and superstition. But I never opposed my parents’ faith. When my parents read us the Bible, I didn’t understand or consider it.

My parents are Russian Germans and were banished to Siberia, Ural region, where I was born on in 1953, in the city of Kospach, Permskaya county. In 1956 our family moved to the city of Vorkuta where my maternal grandma lived. She was sent there due to religious and political reasons, because she was an Adventist believer and said a word in defense of America. Vorkuta was a place where Russians and Germans were sent for different political, religious or criminal reasons.

When I was 14 years old, I experienced the power of the name of Jesus even though I did not understand it. It happened when my brothers got into a fight and my older sister wanted to punish them. Our mom was gone, and my second oldest sister did not think punishment was appropriate; so the two began arguing.

I charged at them with tightly held fists saying, “Stop! Or I will kill you.” There was so much anger in me, they got scared, hid in a corner and began saying, “Satan, leave her, in the name of Jesus Christ.” That very moment, my anger went away. I was very startled by the change in me after these words. 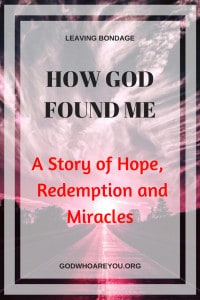 I did not search for God; He found me! When I was 15 years old, my classmates decided to seek fortune-telling about their future and husbands the night before Christmas.

My father told me that it was forbidden to do that, so I said my first prayer before bedtime, “God, if You exist, then show me my future!” That night I had a dream where God revealed Himself to me and showed me that He is my future! I dreamed of a young man of average heights, dressed in brocade, silver suit (He did not show Himself in a dress, as I did not know how people were dressed in the days of Jesus and would have not understood).

His hair was wavy, the color of chestnut running to his shoulders. His eyes were visually vivid, bluish and full of love. I felt as though I was x-rayed in front of Him and He knows my past, present and the future. I had a knowledge that I would search for a man that resembles His image but would not find anyone like Him.

That morning we had a Christian friend visiting, who led my mother to believing and who was sent to Vorkuta for 25 years due to evangelizing. I told them my dream. Mother said, “It is Jesus Christ and He wants you to accept Him in your life,” but I continued to live as usual.

After God Found Me, I Lived My Life As Usual

It was exactly a year later when I had the same kind of dream the night of Christmas, but I continued to live my life. I finished school and enrolled in a Technology School to become a Certified Nurse. One night I had to stay late. When I was leaving campus, I noticed there were men walking, two from one side and one from another. There was no one else around.

They noticed me and turned my way. I understood they wanted to harm me and a thought went through me, “God if you exist, help me!” I was a fast runner, but this time I could not even move. I felt as though my feet were cast iron. The men continued walking my way and I heard them speak to each other, “Let’s not go her way. It’s a strong and tall guy by her, and he has a sword!”

I looked both ways but could not see anyone. I heard them repeat these words to themselves and they turned around. When they were a minimum of 10 meters from me, my feet suddenly became normal again and I took off so fast like never before.

At home, I told my mother about the experience and asked her who that “tall, strong and with a sword” could be, and she said it was an angel God sent to protect me because He thinks of me and because she was worried and prayed for me.

At that time, the church where my mother and two older sisters were attending was praying for the children of believing parents, that the Lord would deliver and baptize them. It was not legally allowed at that time, and there was no actual building to gather in as the prayer house was burned.

“God, if You exist, give me Your Holy Spirit or I will turn to the secular living.”

Because of government persecution, Christian gatherings were done at homes or apartments. It was a Sunday, a day of fasting. Suddenly I had a compelling desire to say, “God, if You exist, give me Your Holy Spirit or I will turn to the secular living,” for I was at the crossroad either faith in God or the world.

When I said these words, my mouth opened and I began talking and singing on clear angelic tongues. I felt as though God lifted me, along with my baby sister, unto the clouds. I was experiencing Divine Presence.

My brother Peter, who was in the same room, had a vision at the same time. He saw a black bird take off from my head to meet a dove coming from heaven. There was a fight in midair and feathers flying around; then, the dove increased in size and swallowed the black bird. When the dove landed on my head, I began singing and talking in heavenly languages.

It’s not people who seek God, but God seeks people! He knows our hearts. Don’t get despaired or discouraged. He hears the prayers of mothers and fathers. Click to Tweet

My mom was excited and took me to church that day. It was my first time stepping into the place of prayer. When those present found out that God answered their prayers, they could not pray in their own language. Everyone prayed and sang in holy languages. It was a huge glory to God!! 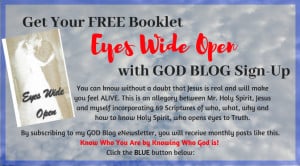 It’s not people who seek God, but God seeks people! He knows our hearts. Don’t get despaired or discouraged. He hears the prayers of mothers and fathers.

Often people seek the gifts and blessings of God, but God gives as He desires and sees fit. It is important to desire and love the Spirit of God Himself, and the rest God will provide.

God is worthy of people’s love. He is grand! He chooses people from variety of families, nationalities, and denominations; for He knows the past, the present and the future.

He hears prayers and continues His works of saving souls. I am very grateful God found me, and to this day, He is my greatest Friend and Husband according to my heart. I give Him all praise! He found me on time, for He is a God of a Right time!

Lisa Pypenko Kravchuk is  the young mother who translated God Who Are You? AND Who Am ? into Russian. Her mother is Mariya, who wrote this article and edited the book. You can see the book at the button below–along with an update on her story: 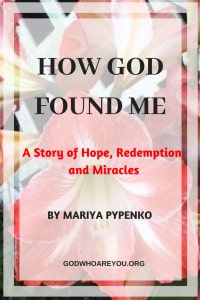 7 thoughts on “How God Found Me: A story of Hope, Redemption and Miracles”