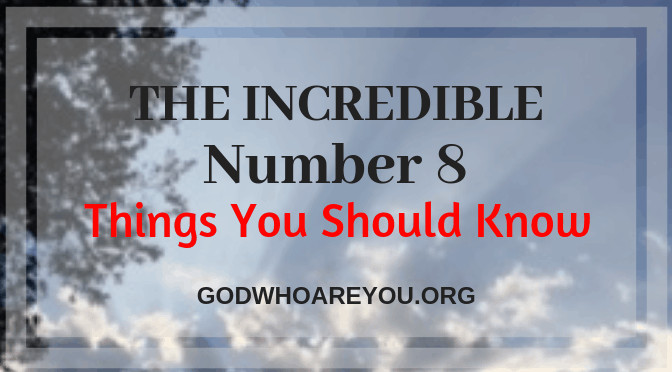 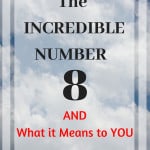 People of all faiths, or no faith, seem to know that 666 stands for the anti-christ. I wonder how many Christians know how the number 8 relates to the real Christ––Jesus Christ, the Messiah––Yeshua his Hebrew name? 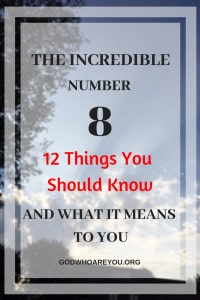 I wonder, because this is new knowledge for me and I have been a Christian for over fifty years. The points below, meshed with my own research and understanding, I am sharing with you are very simplified from a long, detailed article by Gary Stearman, in his “Prophecy in the News” magazine, June, 2012.
Understanding the number 8 gives a deeper meaning and intimacy with Jesus and what His blood sacrifice did.

Stearman writes, “Biblical patterns featuring numbers (as well as articles of worship and practices in the Old Testament Tabernacle), especially the number 8, are spiritual implications to show God’s transcendence in ways we mere mortals can understand.”

Here are 12 deeper biblical meanings of the number 8:

People of all faiths, or no faith, seem to know that 666 stands for the anti-christ. Do you know how the number 8 relates to the real Jesus Christ? There are twelve ways. Click to Tweet

Jesus resurrected after the 3rd day, on the 8th day of the week, the day following the 7th day; thus, bringing Creation to new heights – new life – a new birth – new beginnings – superabundance–which is the meaning of the number 8.

8 persons entered the ark. Noah and his three sons are said to be “fathers of humanity.” They gave mankind a new physical birth, but also a spiritual one through the waters preserving the godly line of Shem, one of Noah’s sons. Through Shem would come Messiah––Jesus Christ. The number 8 stands for a NEW BEGINNING.

The tabernacle in the wilderness journey after the Exodus was laid out in a figure 8 with all the twelve tribes encamped in 8 specific groups. The Holy of Holies was in the center of a huge figure 8. The Holy of Holies is where the high priest met with God.

Leviticus 8:8 is the very center verse of the Torah (first 5 books of Old Testament). Here we learn Moses put the breastplate of twelve precious stones upon Aaron; also, he put in the breastplate the Urim and the Thummim––that somehow revealed the Spirit of the Lord to the high priest (Aaron). The high priest was the literal figure of superabundance, where God’s power made direct contact with the lives of the Israelites.

Urim means fire, the light of fire, a flame, enlightenment, revelation. Thummin means completeness, fullness, wholeness, perfection, integrity, soundness, simplicity, innocence, uprightness, prosperity.
These definitions are the same as for “righteousness,” for Jesus is now our High Priest who makes direct contact with us.

Jesus has made us right with God, and makes intercession for us directly to our Father in heaven—because He now resides INSIDE our hearts through the God’s Spirit, not outside on a breastplate; thus, the Trinity––the Father, the Son and the Holy Spirit––actually dwells inside as One God– just as water is one element, yet can appear in three forms: liquid, steam and ice. Wow! Amazing! Unfathomable! Superabundance!

Moses anointed Aaron in Leviticus 8 with oil. In Hebrew, the word for “eight” means oil or fatness of the olive. Oil is symbolic of the Holy Spirit. After being dedicated for service, Aaron and his sons remained at the door of the Tabernacle for seven days. On the eighth day, and not before, they did their first act of service by sacrificing a sin offering and a burnt offering before the LORD. (See Lev. 8:33-9:2). Thus, Aaron was consecrated for a new and higher order of spiritual activity.

The prophet Samuel anointed David as king by using olive oil–– represented by number 8, a new and higher order of spiritual authority. David was the eighth son.

On the eighth confirmation to Abraham by God of His covenant with him, God provided a lamb in substitution for the sacrifice of Isaac. Because of his obedience, God promised Abraham that his seed would bless the entire earth––through the Lamb of God––Yeshua/Jesus, in the line of David.

The number 8 highlights the importance of a mature faith, as was Abraham’s. Going beyond seven, the number eight symbolizes man’s ability to transcend the limitations of physical existence through grace and life in Jesus Christ. The letter Chet means these two things, having to do with a higher spiritual life. It looks like this: הּ

9. NUMBER 8 – SYMBOLIZES A PERIOD OF TIME BEFORE A MAJOR REVELATION

In the Mount of Transfiguration story in Luke 9:27-31, Jesus said, “There are some of those standing here who shall not taste death, till they see the kingdom of God.”

Eight days passed before he took Peter, John and James to the mountain where Jesus revealed His glory. He talked with Moses and Elijah, “who appearing in glory were speaking of His departure which He was about to accomplish at Jerusalem.”

Later, Thomas did not believe Jesus had resurrected, but on the eighth day, Thomas was with the disciples when Jesus showed proof, and Thomas believed!

10. NUMBER 8 – THE MATHEMATICAL SYMBOL FOR INFINITY

This symbol is an 8 lying on its side as though at rest [which is a completed fish sign]. “For God so loved the world, that He gave His only begotten Son, that whosoever believeth in him should not perish, but have everlasting life” (John 3:16 KJV).

In the Greek language, as in Hebrew, letters of the alphabet double as numbers. Every word has a numerical value. Eight is the Dominical Number. For everywhere it has to do with Jesus Christ as LORD. The Greek letters of Yeshua’s name below come from an 1894 book, Number in Scripture: Its Supernatural Design and Spiritual Significance, E.W. Bullinger.
I = 10
H = 8
Σ = 200
O = 70
Y = 400
Σ = 200
–—888 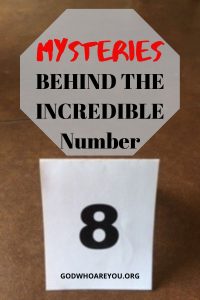 After learning the above 11 points, the Lord revealed more to me. Passover (Easter) has 8 days. Exodus 12:15 says the children of Israel were to eat unleavened bread for seven days leading up to the day they were delivered on the eighth day!

Furthermore, the 8 days of Passover are at the beginning of the year and Hanukkah runs 8 days at the end of the year. In Revelation 1:8, Yeshua/Jesus says, “I AM the Alpha and the Omega, the beginning and the ending, which is and which was, and which is to come, the Almighty” (KJV).

THE INCREDIBLE Almighty God – 888 the Alpha and the Omega – the Beginning, the middle and the Ending

Jesus said, “I am the way, and the truth, and the life; no one comes to the Father except through Me” (John 14:6 NASB). The true Christian believes this claim by Jesus that He is God––the only way to heaven––basically for three reasons:

2) John the Baptist said of Jesus, “Behold, the Lamb of God who takes away the sin of the world!” (John 1:29). The whole purpose for the 400-year bondage of the Israelites at the Passover Exodus from Egypt was to demonstrate freedom by blood. A lamb was slain whose blood was smeared on the doorposts of the Israelites homes. When the death angel saw the blood that house was passed over.

3) “By this we have been sanctified [cleansed] through the offering of the body of Jesus Christ once for all” (Hebrews 10:10). All sin for all people has been eradicated, but freedom comes only for the individual who believes and receives Jesus personally as the only Truth and way to heaven by surrendering to Him as Lord in his own life and as Lord of all.

Can you think of any incredible number 8’s in the Bible that may have been missed here? If so, please leave a message below for us all to read.

I hope this encourages you as much as it has me in researching the number 8 and how it leads to our Savior and soon coming King!

If you would like to know more about Jesus and His Names, check out my workbook: GOD Who Are You? AND Who Am I? Knowing and Experiencing God by His Hebrew Names. 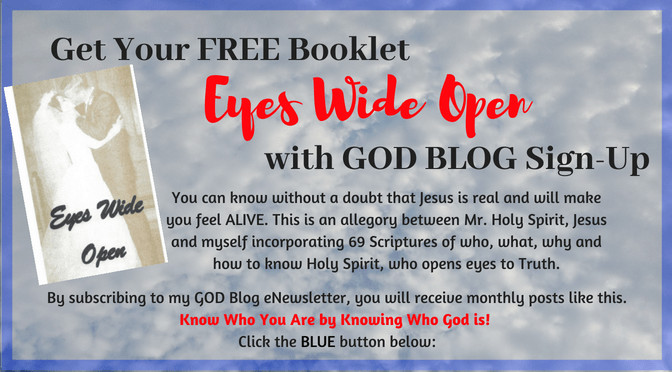 7 thoughts on “The Number 8 – Twelve Things You Should Know”