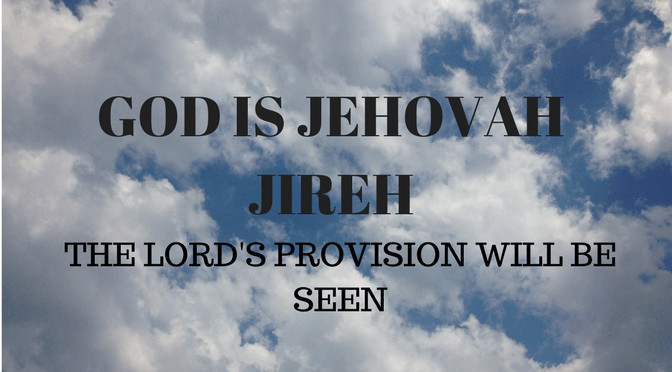 On the third day of their journey, Isaac asked his father as they walked on, “The fire and wood are here, but where is the lamb for the burnt offering?” –Genesis22:7

“Abraham said, ‘God will provide for Himself the lamb for the burnt offering, my son.’” –Gen. 22:8 NASB 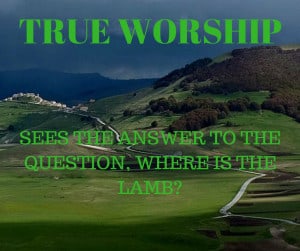 The root Hebrew word for provide includes: to look, to view, to be seen, to show oneself, to appear, to reveal oneself, to be shown, to cause to see, to show, to ascertain, having a position of trust.[1] Author Henry T. Blackaby says, “Any person in covenant with God sees things others do not; he hears things others do not hear; and his heart knows things others do not know.”[2] Somewhere during Abraham’s three-day journey, he had to have received a divine revelation from God in greater depth than he had before. His thinking may have gone like this: If God would ask me to sacrifice my son as atonement for my sin, why would He not do the same for the world’s sin?

As Abraham followed through with God’s directions, He glimpsed the future. God said of Abraham when He was about to destroy Sodom and Gomorrah, “Shall I hide from Abraham what I am about to do?” (Gen. 18:17). This revelation is another time God revealed what He was about to do—send His own Son—from Abraham’s seed. This may explain Abraham’s words, God will provide for Himself the Lamb, with a capital L—Scripture having past, present and future dimension. 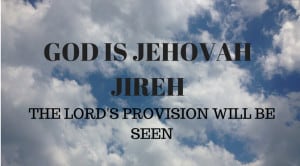 THIRD-DAY WORSHIP: A RELATIONSHIP WHERE GOD CAN SHARE HIS HEART

“God desires a relationship where He can share His heart.”[3] God did this with Abraham as He desires to do with us. Three days in this passage is very significant. In the third month—on the very day—the children of Israel left Egypt, God came down out of heaven. The Lord said to Moses, “Go to the people and consecrate them today and tomorrow. Have them wash their clothes and be ready by the third day, because on that day the Lord will come down on Mount Sinai in the sight of all the people” (Exod. 19:10-11 emphasis added). On that morning, there was thunder and lightning, a thick cloud, and a loud trumpet blast.

Mount Sinai was covered with smoke, because the Lord descended on it in fire. The smoke billowed up from it like smoke from a furnace, the whole mountain trembled violently, and the sound of the trumpet grew louder and louder. Then Moses spoke and the voice of God answered him (emphasis added).—Exodus 19: 18-19

On the third day, The Lord called Moses to the top of the mountain for worship and on that day, gave him His Word—the Ten Commandments.

Deliverance came on the third day for Esther. She was a Jewish orphan in Persia whom God raised up as queen; she then faced a dire circumstance. The whole captive Jewish nation was on the verge of being annihilated. Her Uncle Mordecai persuaded her that it was in her hand to be used of God to bring deliverance to her people. She asked Mordecai to gather all the Jews together and said, “Do not eat or drink for three days, night or day. I and my maids will fast as you do. When this is done, I will go to the king, even though it is against the law. And if I perish, I perish” (Esther 4: 16).

Queen Esther worked the plan the Lord revealed to her after three days, and because of spiritual consecration, worship and cleansing of sin, through fasting and prayer, the Lord brought deliverance for His people—through one woman. On the third day, the Lord arrived on the scene, like a teacher showing up after the test.

At the root of all true worship is seeing the answer to the question, “Where is the Lamb?” Coming into His presence takes serious heart seeking, usually to a special place, going alone, with the Word of God. Many times, it is a slow difficult way. Drastic circumstances may mean fasting and prayer for three days and three nights. We can be assured, though, if we do these things, the Lamb, who was resurrected on the third day, will be revealed.