Before the journey, God told Abraham He would reveal to him upon which mountain to make the sacrifice. Verse 9 is past-tense, “When they reached the place God had told him about. . . .” Somehow, after reaching his destination in the land of Moriah, Abraham knew he was on the exact spot He should be, and this is where he experienced God as Jehovah-Jireh [The Lord’s Provision Will Be Seen].

Bible scholar Adam Clark says of the land of Moriah: “This is supposed to mean all the mountains of Jerusalem, comprehending Mount Gihon or Calvary . . . Mount Calvary is the highest ground to the west. . . it was upon this mount Abraham offered up Isaac, which is well known to be the same mount on which our blessed Lord was crucified. Beer-sheba, where Abraham dwelt, is about forty-two miles distant from Jerusalem”—approximately three days journey. [1] 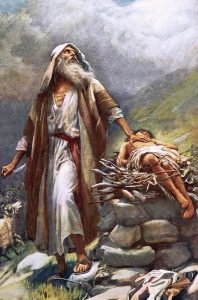 Abraham built an altar on Mount Calvary, where the sinless Lamb Jesus was later crucified. He arranged the wood on it, bound Isaac, and laid him on the wood. Then he reached out his hand and took the knife to slay his son. But the angel of the Lord called out to him from heaven,

Again, Abraham replied, “Here I am.”

Abraham looked up, and to his great relief, saw in the thicket a ram caught by its horns. He grabbed his son and hugged him close to his heart before seizing the ram and sacrificing it in wondrous praise to Jehovah-Jireh, calling that place, The Lord Will Provide. The Hebrew word for looked is the very same root word as for provide, meaning that looking to God is the same as seeing the provision.

AFTER PROVISION: A SUMMONS

The angel of the Lord called to Abraham from heaven a second time, and said:

“I swear by myself, declares the Lord, that because you have done this and have not withheld your son, your only son, I will surely bless you and make your descendants as numerous as the stars in the sky and as the sand on the seashore. Your descendants will take possession of the cities of their enemies and through your offspring all nations on earth will be blessed, because you have obeyed me.”—Genesis 22:16-18

When the Teacher showed up after the test, He called to Abraham twice. The Hebrew word for called is qârâ, meaning “to invite; to call by name; to muster any army. The basic meaning of qârâ is the enunciation of a specific message. It is usually addressed to a specific recipient and intended to elicit a specific response. Rarely does it refer to a random outcry.”[2]

Both times in this chapter, when God called Abraham by his name, he answered, “Here I am.” He was open, not hiding. He was willing, ready, making himself available to whatever God said to him or asked of him. His heart was committed to being obedient.

After Abraham passed the test, God repeated the same blessing to him with two additions: (1) your descendants will take possession of the cities of their enemies and (2) through your offspring all nations on earth will be blessed. God was telling them they would possess the land of their enemies and from one small nation, the whole world would be blessed—establishing Israel forever.

As Abraham’s spiritual offspring, we are those descendants who are called by name, individually and as an army, to possess the land of our enemies by sharing the Good News of Jesus Christ, with the promise that all nations will be blessed through us.

As students, what are we to learn from Abraham’s test?

After the test, God repeated for the third time—a good teacher always repeats his most important lessons—your son, your only son (Gen. 22: 2, 12, 16). 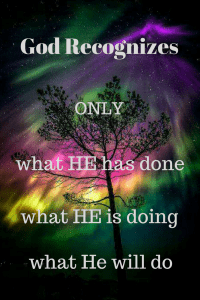 Although God gave Ishmael a blessing, he wanted Abraham, and us, to know He recognizes nothing stemming from self effort. He recognizes only what He has done, what He is doing, and what He will do.

Like the teacher, Jehovah-Jireh will show up after the test to let us know what He recognizes as truth. He will summon us by our specific name only when He sees His reflection in our eyes. He gives no shortcut. We have to go through the refiner’s fire to get to the other side where He desires to do His work through our refined lives.

The children of Israel could have gotten from Egypt to the Promised Land in an eleven day journey (see Deut. 1:2), but God would not allow it. He said, “If they face war, they might change their minds and return to Egypt. So God led the people around by the desert road . . .” (Exod. 13: 17-18). God knew they would need the lessons of the wilderness in order to be successful in the land when He would summon them by name to enter into His purpose. God has a divine purpose for us that only Jehovah-Jireh recognizes and will open our eyes to see, as He did for our forefather Abraham.