While returning home from another day of servicing book racks in grocery stores in Oklahoma City, my thoughts ran to what I had quickly read in my devotions before starting the trip. The Scripture was I Corinthians 3:9, “You are . . . God’s building.” The statement was made that those who have gone on to be with the Lord from all past generations are in the body of Christ and we, living today, are in his feet. What a profound statement, I thought.

Previously, I had prayed that God let me know what was going on in my life. My goal had been to service twenty-five stores in Oklahoma with Christian books, but now, I found myself servicing fifty! My husband was supportive of me; that boggled my mind. I thought, Well, I certainly do feel like feet running all over the place.

I thought back sixteen years to what a minister had said, “Even if you are only in the heel or a little toe in the body of Christ, you are still above all satan can do to you. You have authority over all the power of the enemy, because Jesus’ heel bruised the head of the serpent when Jesus arose from the dead” (see Genesis 3:15.) That means I am in Christ and Jesus is seated at the right hand of the Father in heavenly places far above all evil. And, all things are under both our feet (see Eph.1:20-22).

Could it be that I literally am that little toe in the body of Christ, or in the heel? I tried to picture how it might look, with Christ as the head of the body. In the neck would be Adam and Eve. In the shoulders their sons and daughters, Noah and the patriarchs of the Bible—Abraham, Isaac, Jacob. And in the torso, the twelve tribes of Israel with the kings, and major and minor prophets; in one leg, my grandparents, and in the other leg, my Aunt Dorothy who suffered all her life physically. I saw her whole and complete in Him; then, in the ankles, I envisioned those who had gone on before us in the Christian book business. Lastly, I saw believers who are alive today and remaining on the earth, in the soles of the feet of this massive body of Christ.

As I continued to ponder the Bride while driving past open wheat fields almost ready for harvest and the one Church destined for the throne—that we are his feet—something began to happen.

The feet began to move

I just watched . . . the body of Christ began to move. It seemed so very heavy, burdensome and cumbersome . . . like in a slow motion movie. Its shape resembled a huge, fat teddy bear. It very slowly turned . . . then, it took one step, then another step, very, very slowly, until each step became faster and faster until it was running to one side of the United States to the other—east then west, to and fro, back and forth.

I continued to watch as though I was watching a television set—faster and faster the body ran. Soon, the feet gently lifted from the ground, just as smoothly as an airplane taking off from a runway. It was like the body was going so fast that it overcame gravity. With the vision came an internal sensation exactly like being on an airplane—feeling its powerful thrust upon acceleration.

I asked God to remove this from me if it was not from Him, but, if it was, I prayed it would never go away. It has intensified. I told no one of this incident. I could not. Every time I got alone, it would return. I’d see it all over again. Tears came every time the thought came. Finally, I sat down and asked God to show me what had happened. My Bible opened to Daniel 7:28 that says, “My waking thoughts troubled and alarmed me much, and my cheerfulness of countenance was changed in me; but I kept the matter [of the interpreting angel’s information] in my heart and mind” (Amplified, emphasis not mine).

I knew then that God had taken control of my “waking thoughts.” A couple days later, God reminded me of what Joseph said to the Pharaoh, “That the dream was sent twice to Pharoah and in two forms, indicates that this thing which God will very soon bring to pass is fully prepared and established by God” (Gen. 41:32 Amplified). The incident with the geese in October, 1994, pictured the Rapture, only in a different form. Unlike this vision, it brought great joy to my heart; this one, great sorrow which I could not understand.

“You aren’t just beautiful feet, you are my feet.”

The events continued. July of 1995, at my Christian book convention, Win and Fran Oakes told a story about a little girl who saw Fran’s feet under the bathroom stall and said, “Hello, book lady.”

“How did you know who I am?” Fran asked.

“By your shoes,” the little girl replied.

Ken Medema sang an impromptu song about how beautiful the feet are of those who bring Good News (see Isa. 52:7). As he sang, I heard these words in my right ear, “See there, you aren’t just beautiful feet, you are my feet.”

I looked around to see who was speaking; No one was there.

Those words haunted me all the way home, all night; literally, we could find no motel.

I knew it was time to tell someone when the image began to tear me up inside, thinking I would burst if I did not tell. Afraid no one would believe me, December of 1995, I prayed, “Lord if this is from you, I ask that when I tell Jim, he will not say one word.”

I walked into the living room and told Jim the whole thing. He said nothing, did not even look at me, got up and went into another room. 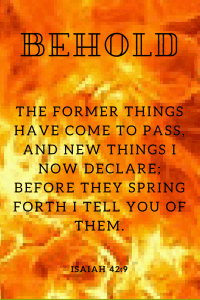 Later, in January 1996, when recounting all this to him, with the geese story, Jim very firmly said, “You have never told me any of this.”

Even though God had answered my prayer, I got very upset. The Holy Spirit was with me, for the Left Behind book [about the Rapture[1] and those left behind] had just come out on cassette. I played it for Jim that night in a motel room to which I had kidnapped him after work.

Sometime before this, while on an overnight, rack-servicing trip, Tim LaHaye[2] and Jerry Jenkins introduced their book, Left Behind, on television. Since we are all part of the same body, I felt God would not say something to only one section of the body, so this was a great comfort. The Holy Spirit also reminded me of Isaiah 42:9, “Behold, the former things have come to pass, and new things I now declare; before they spring forth I tell you of them.”

Are your feet in the game, or on the sidelines just watching?

Jerry Jenkins said something I have always believed but had not heard anyone else say. He likened our time in history to a football game—that it’s our choice if we will play or just be watchers. Since Jim was a football coach for many years, this is something God had revealed to me. Jenkins also said, “We are all living in a time when we can be key players in history.”

Meanwhile, every time I closed my eyes, the vision was there, and tears would come— over and over—for over one year.

I asked God, “What is it You want? Why are You doing this to me?” He spoke to my heart: I’ve only answered your prayer—the one where you asked Me if you were a part of the last generation on earth. My plea to God continued:

Then, do You want me to promise I will share this? Many Christians believe You will come “like a thief in the night” without seeing their personal responsibility for taking as many people with them as possible. They don’t realize the harvest has to come first, meaning we must be the mature Bride—to help harvest—before You come for us. I feel sharing this will only make it worse. What am I to do? Nevertheless, if you want me to share I will—if You give me opportunity.

Finally, some relief; the weight began to lift somewhat, but sharing meant fearful obedience and creating opportunity with steps of faith.

If you enjoyed this excerpt from my book, GOD Who Are You? AND Who Am I? I invite you to sign up for my free eCourse bonus to the book: LEARN MORE – and SIGN UP.

[2] In 1993, Dr. LaHaye and Dr. Thomas Ice founded the Pre-Trib Research Center (PTRC) for the purpose of encouraging the research and teaching and defense of the pre-tribulation Rapture and related Bible prophecy doctrines. It is the PTRC that has sponsored the annual study group meetings since that time, and there are now over 200 members comprised of top prophecy scholars, authors, Bible teachers, and prophecy students. For more information on Bible prophecy and the Rapture, a great resource is Charting the End Times, by Tim LaHaye and Thomas Ice. 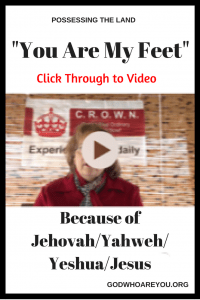