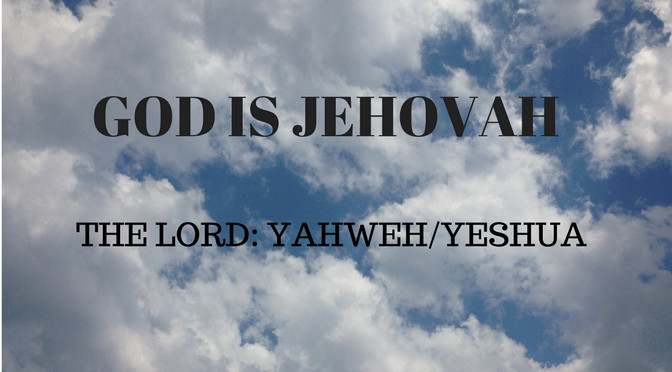 What do Yahweh and Yeshua have in common?

The truth of who Jesus is, was, and forever will be, is found in His name. Jesus’ Hebrew name—YAHWEH of the Old Testament—is Yeshua of the New Testament. Yeshua is composed of the same four letters—YHVH. God does nothing by accident. The name Jesus is the English translation for Yeshua.

Ancient rabbis used to say that when the Lord reigns on earth, He will be known by his one name, YHVH, or Yeshua (see Zechariah 14:9). Jesus was a popular name in his day, but Jesus the Christ is the only one who fulfilled the meaning of YHVH—Y as humility; H as Almighty God; V as redemption; and H as springs of water.

Yeshua Jesus is the exact representation of Jehovah/Yahweh/LORD

Jesus is Jehovah—the great I AM who is our very being, our High Priest leading the way to our heavenly Promised Land.

After Judas betrayed Jesus, he and the Pharisees went to get Him. Jesus, knowing all that would befall Him, asked them whom they sought. They told Him they wanted “Jesus the Nazarene.” Jesus said to them, “I am He.” 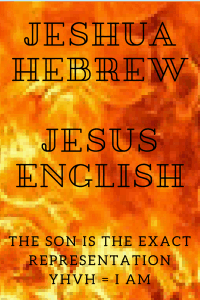 “The Son is the radiance of God’s glory and the exact representation of his being, sustaining all things by his powerful word” (Heb. 1:3 emphasis mine), and He lives within us by His Spirit, and He has given us His name to use.

Is Jesus God? He is the exact representation of His very being and the Holy Spirit who resides within us. No wonder Paul prayed we may be able to comprehend these truths:

I keep asking that the God of our Lord Jesus Christ, the glorious Father, may give you the Spirit of wisdom and revelation, so that you may know him better. I pray also that the eyes of your heart may be enlightened in order that you may know the hope to which he has called you, the riches of his glorious inheritance in the saints, and his incomparably great power for us who believe. —Ephesians 1:17-19

Jehovah, Yahweh and LORD are interchangeable. The first time Jehovah [YAHweh in Hebrew] appears in Scripture is Exodus 3:14-15:

In the same chapter, Moses had already turned aside to see why the bush was burning and not consumed. When God noticed Moses watching His presence as a blazing fire in the bush, God revealed His heart—to deliver His people from the power of the Egyptians. He told Moses, “I want to use you to do it.”

Moses resisted at first and finally said, “Suppose I go to the Israelites and say to them, ‘The God of your fathers has sent me to you,’ and they ask me, ‘What is his name?’ Then what shall I tell them?” (Exod. 3:13).

In other words, Moses knew that just saying “God [Elohim]” sent him was not enough, or that saying the “Lord” sent him was not enough. All nations had elohim (gods) whom they worshiped. All had adonai (lords) whom they called their masters. Sarah spoke of Abraham as her lord; Ruth spoke of Boaz as her lord. So, Moses was asking his Elohim, his Creator, what His own unique name was.

These words, I AM, are also seen in the original Hebrew as YHVH. These four letters called the Tetragammaton (Greek for ‘four letters’) are unique to Him alone. Only the descendants of Abraham, Isaac, and Jacob received the name YHVH for their God. He alone was their Elohim. He alone was their LORD. Any time LORD, or GOD are seen in all caps, this is His name—YHVH.

Israel My Glory is a magazine put out by the Friends of Israel Gospel Ministry, Inc. and a great resource on Israel and the Jewish people. Thomas Simcox writes, “A possible explanation for the composition of the name Jehovah from the Hebrew might be yehi—he will be; hovi—being; hah yah—he was. Jehovah might also be understood as an acronym using parts of the same Hebrew words, making Ye-hov-ah, a name that states, ‘I will be (future) because I am (present), because I was (past).’

“YHVH not only contains the aspects of past, present and future but also declares that God exists in the eternal present because all three aspects are the same to Him. He is, and He is eternality itself. Thus He was telling Moses in Exodus 13:15, ‘I will be what it shall be. Whatever happens, I am it. I am your past, I am your present, I am your future.’”[2]

WHY IS JEHOVAH SO HOLY A NAME?

Before the destruction of the first temple in Jerusalem in 586 B.C., the name signified by YHVH was pronounced regularly with its own vowels, but the Hebrew language was lost and today no one knows what they were or exactly how the name was said. “Because it was considered too holy to utter, down through the ages YHVH was vowel-pointed with the vowels of Adonai. Today almost all Jewish people automatically say ‘Adonai’ whenever they see this name in the Sidur (Jewish prayer book) or Scriptures. Some will simply say ‘Ha-Shem,’ which means ‘the name.’”[3]

His very own personal name—Jehovah! A Hebrew may say “my Elohim,” or “my Adonai,” but never “my Jehovah.” Jehovah is His name. No one would ever say, “God is my Jehovah.” God is Jehovah—His most sacred name, for He is LORD.

“God spoke further to Moses and said to him, ‘I am the LORD; and I appeared to Abraham, Isaac, and Jacob, as God Almighty [El Shaddai], but by My name, LORD, I did not make Myself known to them” (Exod. 6:2-3 NASB). By His name Jehovah He was never known.

In other words, God changed His own name, just as He changed Abram’s name to Abraham. He is revealing it now because He is getting ready to do amazing things as He takes them into the Promised Land—for them to be His people and Him to be their God. He revealed His personal, intimate name because He desired a personal, intimate relationship with each one of them.

Of all the names we have studied thus far, each one spoke of what God will do for us, but Jehovah, YHVH, is His essence of being—so holy a name.

GOD is, thus, He is not interested in what we can do for Him, but that we understand who He is so we can understand who we are and what He can do in our lives.