A group of Christians in Arkansas City, Kansas, decided they wanted to start an individual affiliate with Habitat for Humanity to help families in their town to be home owners. Many people who joined the group thought they could start immediately to build a house, but it was not that easy. It took a lot of paperwork and research to get the application process completed and two efforts in presenting it to Habitat for approval. These forming and storming stages— not easily defined from each other—took two years.

For six months the group went no where. Finally Wayne Short, a retired plant operations manager with General Electric, took the lead from the official president and said “We will have an agenda at every meeting, and each committee will report their progress monthly.”

The norming stage took shape as each committee did their research and helped write their part of the application for their 401 3 C status for tax purposes.

The performing stage began before one house was built. The fundraising committee found start-up capital. The home selection committee took applications from qualifying families. The hard part was finding an electrician and plumber able and willing to donate time, but they did find them. 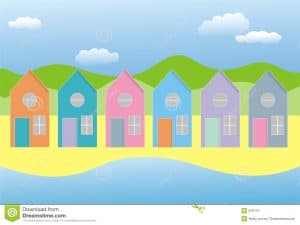 The result? Six houses were built in eight years—one house per year. With a $300.00 deposit, a family owned their house with a no-interest payment—less than their previous rent payment. Twenty-five children’s lives were impacted. After a family’s house was built, that family helped build the next and on and on. As revenue increases, the team will be able to build more than one house per year. All volunteers were impacted as they gave. Like the leader of the flock of geese, after the eight years Wayne passed leadership to the retired city manager and fell back, but he kept on building.

Faith was built and restored for all involved, especially the recipients. Rosene, the second homeowner partner, sent a letter to the group. She spent thirty-five years trusting and believing in the Lord, but her life spiraled downward as her marriage fell apart and divorce seemed the only option. Feeling like a failure and angry at God, one day on her porch, she poured her heart out—honestly facing her life with Him. “I want a sign! I want You to prove to me that You exist, that You really do hear me when I pray. If you can part the sea, You can give me a simple sign.”

Rosene expected a bolt of lighting, a rainbow or an angel and left it at that. About a month later, she received a phone call asking if she would be interested in being a candidate for the Habitat for Humanity organization. After her house was built, she wrote:

I worked side by side with the most wonderful people I have ever met in my life. . . God sent me not one, but a dozen or more angels—those everyday, hard working, unselfish, God-fearing people who were sent (I believe) to prove to me that there is still good in people and not everyone is asking “What’s in it for me?” I have a beautiful home to prove this, but far more important, my faith is restored and my soul is free once more.

First three of seven dimensions of the military bride:

The military Bride is the great host of the “Lord of hosts.” The Amplified Bible gives an interesting interpretation of Psalm 68:11, “The Lord gives the word [of power]; the women who bear and publish (the news) are a great host.” The New American Standard Bible version also says women in this verse. The New International Version says company, which leaves no one out. The point is, women are taking on the role of John the Baptist who prepared the way for Jesus the first time, saying, “ Repent, for the kingdom of heaven is near” (Matt. 3:2). God birthed His Son through a willing servant, Mary. He appeared to the seeking women first after His resurrection. Then and today, they are proclaiming He is alive and coming again—the men coming along beside them.

Chuck Pierce encourages women when he writes, “The Hebrew word for ‘host’ is tsaba or Sabaoth, which connotes a military group that is always victorious. Such a host should strike fear in the camp of the enemy. Imagine being marched upon by countless determined ‘shebears’ proclaiming victory with every step!”[1] These she-bears know who they are. They know the B-E-A-R facts of faith and have become determined warriors.

Hannah was one such warrior. She could bear no children “and she made a vow and said, ‘O Lord of hosts, if Thou wilt indeed look on the affliction of Thy maidservant and remember me, and not forget Thy maidservant, but wilt give Thy maidservant a son, then I will give him to the Lord all the days of his life, and a razor shall never come on his head’” (1 Sam. 1:11 NASB).

Hannah called upon the Lord of hosts to fight for her. God heard her agony and gave her a son, Samuel, who changed history. Likewise, Michelle H. sees herself as a very ordinary woman, but her story as very extraordinary. Like Hannah in the Bible, The Lord of hosts fought for Michelle and her husband and brought them victory. They reached the performing stage.

The Lord of hosts brings Michelle H. to the performing stage

Michelle and her husband prayed about how to have a family. When an adoption opportunity came along, they jumped on it. The only thing is that they did not pray specifically about whether this particular child should be theirs. At the last minute, the mother changed her mind and gave the baby to someone else.

Devastated, and after more prayer and seeking God, they decided that in vitro fertilization was the right decision for them, but on their anniversary of December 28, Michelle received a phone call while she was at school. On December 24, a baby boy was born and they could adopt him. They would be able to pick him up right away—the Monday following Christmas when school was to resume, but God intervened with His plan—Joshua Caleb.

Michelle’s story of how Jehovah-Sabaoth, the Lord of hosts—who fights for her and is always performing for her—does not stop there. She is still on the front lines of battle. After three years, she applied for a high school teaching job. The decision to go back to teaching was difficult, but her husband told her, “If God wants you there, he’ll open the door; if not, you won’t get it.”

Michelle applied for a computer technology job (her master’s degree), but was encouraged to apply for the newly open math position. As it turned out, daycare had two openings for her girls, and she was hired to teach Algebra 1 to at-risk children who don’t want to be in school. She did not know what to expect. Her first class was children with downs syndrome who were not ready for Algebra.

She and other teachers in her public high school met to pray and intercede for their students. The Lord told Michelle, “You need to serve all these kids just like the ones you served at church in the youth group. If you don’t care for them, who will? They need to know that somebody cares about them.”

Michelle started writing notes, “Thank you for your hard work.” She mailed them to their house. The students came up to her and said, “I got your note!” One student followed her all afternoon wanting her to read that note to him. He had never gotten a “good” note from anyone before.

Michelle put her faith on the front lines with her family and at work. Proclaiming victory with every step, she said, “I had to step out first.”

The military Bride is the mature bride performing on 100% commitment, not necessarily ability

The Navy Seals provide a training program called BUDS, “Basic Underwater Demolition School.” During “hell week,” the trainees get about four hours sleep in five days, which allows the trainers to determine the degree of the students’ commitment. Trainers don’t look for just the best in everything done during this time, but to see if each individual is putting out everything 100%. Complainers are not tolerated.

BUDS’ unofficial motto is: “The only easy day was yesterday!”

Rolf Garborg, founder of Successful Living, Inc. Christian book distribution network in 1966 said, “God is not fired up about our ability or inability, but about our availability.” He is looking for individuals willing to put in everything from their heart twenty-four hours per day.

Captain Matt’s job with the 101 Airborne Division was Army intelligence in Iraq. On July 22, 2003, in a regular phone call he said, “We don’t know how reliable our intelligence is, but we think we have Saddam and his sons cornered in Mosul. Please pray.”

Matt’s mother immediately asked for prayers of all the Christians with whom she worked. One hour later, it was announced on the radio that a fire fight rendered victory over the evil sons of Saddam in Mosul.

Likewise, our regular contact with the Lord of hosts will let us in on the intelligence of headquarters  (in heaven) ahead of time, and in the present—when we are 100% committed and make ourselves available to Him.

Linda B. was especially hurried to get on the road to see her grandchildren after work one day. When she got in her car, she found her mind confused and could not remember where she was going! She circled around the parking lot trying to remember what she was doing. She found herself at the local Wal-Mart, bought something she did not need, and ran into a young person on the way out. Conversation led to the reality of the individual’s desire to commit suicide. Linda spoke hope to her and, with the help of others she got involved from her church and community, pointed her to Jesus Christ. Linda’s prior commitment to the Lord put her in contact with the One who directed her steps to meet the need of that young person, and Linda was glad she was a part of a team that day.

On another day, after a season of trusting God with her daughter and son-in-law to have a child, Linda watched her daughter walk by. When she saw her, she heard the Spirit’s voice, “Keri’s pregnant.”

Unknown to Linda, her son-in-law was standing behind her when she said those words. He told Keri; she went to the doctor and found the words to be true. When they called Grandma and Grandpa to make the announcement, Linda said, “I know.”

The mature military bride in battle has intelligence from headquarters: “See, the former things have taken place, and new things I declare; before they spring into being I announce them to you” (Isa. 42:9).