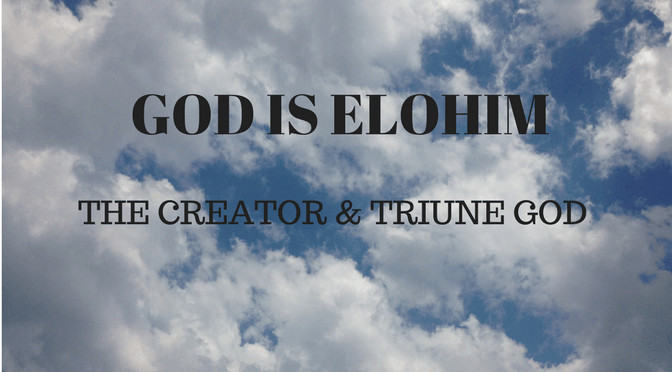 Who is the Holy Spirit Creator who will open our eyes–Elohim?

We met El Roi in the previous chapter, the “God Who Sees Me,” but are we able to see Him? In the classic book, The Attributes of God,  A.W. Tozer, discusses Elohim Holy Ghost Creator. He writes, “No one can see God nor believe in God until the Holy Ghost has opened his eyes. When we grieve and quench the Holy Ghost, when we neglect Him, crowd Him out and substitute other things for Him, we make blind men out of ourselves.”(1)

I was that blind person.

How Does Elohim Holy Ghost Spirit Creator relate to the Trinity?

Who is this Holy Ghost who will open our eyes? I had grown up hearing about the Trinity– three Persons in one: the Father, the Son, and the Holy Spirit–but that was about it. I had no understanding of the Trinity or the Holy Spirit, except to think of either of them as being an “it.”

I had learned that one could think of the Trinity as being one person like a man who can be a father, a husband, and a son, or a woman can be a mother, a wife, and a daughter. That helped, but now I know there is so much more, especially to this Holy Ghost, who I prefer to call Holy Spirit, for there is nothing in Him that should cause us to fear.

Anne Graham Lotz explains the Trinity in her book, The Vision of His Glory. She says, “Every illustration that seeks to explain it seems superficial; however, thinking of water, which retains its basic elements in the form of liquid, steam, or ice, may help. God retains His power, character, personality, and attributes in the Person of the Father and the Son and the Holy Spirit. And although the Trinity is not named as such in the Bible, it is implied again and again.”(2)

We are introduced to the Holy Spirit in the first chapter of the Bible in the first verse, “In the beginning God [Elôhîym] created the heavens and the earth” (Gen. 1:1). Elôhîym, commonly seen as Elohim, is the Hebrew name for our Triune Creator God, and is mentioned twenty-eight times in the first chapter of Genesis. “It is the most common Hebrew word translated God in the Old Testament.”(3)

In the first three verses of the Bible, the Trinity is implied to the reader. We have seen how Genesis 1:1 speaks of God as Creator. But Genesis 1:2 speaks of God the Holy Spirit, “Now the earth was formless and empty, darkness was over the surface of the deep, and the Spirit of God was hovering over the waters.”

In Genesis 1:3, the first words were spoken, “And God said, “Let there be light,” and there was light . . .” It was God the Son, or Jesus Christ, who spoke these very words that brought everything into being. He then became the living Word made flesh that His disciple, John, tells about in the New Testament:

Another passage of Scripture shows that Jesus was with His Father from the very beginning: Proverbs 8:22 and 30 says, “The Lord formed and brought me (Wisdom) forth at the beginning of His way, before His acts of old. I (Wisdom) was beside Him as a master and director of the work; and I was daily His delight, rejoicing before Him always (Amplified).”

Let us not confuse the different names of God examined in this book to mean He is more than One God. His names serve to show the different characteristics of His personality and the attributes of this One and only true God of the universe.

The Three in One God – Father, Son and Holy Ghost Spirit

We can think of God the Father as the architect, the mastermind–our Father who is in heaven, on the throne, never leaving it, always orchestrating every event, nothing outside His gaze. God the Holy Ghost, or Spirit, is the creative power that brings “life.” And, Wow! Jesus, the Son, who was with His Father from the very beginning, spoke the Words of life that brought the Father’s plans into being. He became the living human Word in the flesh when His Father sent Him to earth over two thousand years ago. His Word we still have in the form of our Bible, the Words of the Creator and Triune God.

When it was time for Jesus to go back to His Father, He said, “And I will ask the Father, and he will give you another Counselor [the Holy Spirit] to be with you forever’ (John 14:16). Just like water, steam and ice, each Person of the Trinity has a different role to play. How three dimensional and awesome is our Triune God!

“With all you have gotten, get understanding” (Prov. 4:7 Amplified). Having a true understanding–of anything–makes the difference between life and death.

This chapter, and the next, is my understanding of the Holy Spirit. I call Him Mr. Holy Spirit in the story of how He became real to me–to illustrate that He is a Person, with a capital “P.” He is not an “it.” He is the power who creates, and who makes alive and raises the dead!

The following part of “My Story,” is an attempt to show the Holy Spirit’s role of taking knowledge from our head and planting it in our heart. The next chapter is a continuation of my story as written in 1980, which is also contained in a booklet entitled Eyes Wide Open. My purpose in sharing this is not to teach any certain doctrine or rule. I am attempting only to share my own experience, how Jesus became real to me through the Person of the Holy Spirit–God the Creator-Elohim.

My ‘Something More’ Story

All of the preceding paragraphs are just pretty words unless they can mean something to us personally. After a series of events that occurred in my life, I met and received the Holy Spirit. As a young mother in the 70’s, I realized I was spiritually powerless to teach my children the ways of the Lord as my parents had taught me. I knew I had only one opportunity, and time was running out–the most impressionable time of their lives being before age three. My inward longing was: where was the power, or ability, to be what I know God wanted me to be?

It was then that Christian television came on the scene with interviews of lively, enthusiastic Christians like Corrie ten Boone. Her story in the book The Hiding Place tells of the time she spent in a concentration camp. She and her family were arrested for hiding Jews during World War II. Corrie prayed and God answered her prayers. For example, she asked God to blind the eyes of the guards to the Bible she openly held while going through a search line- -naked. God did. Where did she get the boldness and understanding to pray that prayer, to “be” so strong?

Shortly afterward, my sister Pat sent me a book, Hot Line to Heaven, by Frances Hunter. This lady prayed and God answered her prayers, too. It was incredible! I was intrigued that one could actually pray and see results. For instance, she prayed for rain during a famine, and it rained. This was the first book I read as an adult. I hated to read; however, this book was different. It answered another question in my heart: is God’s love big enough to meet needs today as He did in Bible times?

I kept reading and watching to see what these women had that I did not possess. Finally, I determined they talked about the Holy Spirit as Someone they knew. They referred to Him as though He was a real person. Catherine Marshall was wife of the Reverend Peter Marshall, a renowned Presbyterian pastor and Senate Chaplain. In her book, Something More, she tells about meeting the Holy Spirit. Two unforgettable statements she made about Him were: He is able to teach a person everything he needs to know, and that the Holy Spirit is a gentleman.

For the first time in my life, I searched the Scriptures. I came across Acts 1:8 where the resurrected Jesus is about to ascend back to heaven to His Father. He tells His disciples, who already knew Him, “. . . you will receive power when the Holy Spirit comes on you, and you will be my witnesses in Jerusalem, and in all Judea and Samaria, and to the ends of the earth” (emphasis added.)

I just wanted to be so bad, to feel alive and to get away from feeling like I had to do, but no matter what I prayed or how I prayed nothing seemed to make a difference

If you enjoyed this excerpt from my book, GOD Who Are You? AND Who Am I? I invite you to sign up for my free eCourse of the whole book at the link above, or LEARN MORE with the button below. Join into the adventure of your lifetime!

Be sure to download your EYES WIDE OPEN booklet at this link; It tells the rest of the story: