By the time we get to this last harbor lighthouse, we have an assurance in our heart of what we think God is telling us, especially if we have researched the details. We know if an opportunity does not present itself, it was not God speaking in the first place. It may have been a selfish ambition or a desire from a wrong motive. In these cases, closed doors are good. Proverbs tells us that “in his heart a man plans his course, but the Lord determines his steps” (Prov 16:9)-or is in control of circumstance. With experience, we find we don’t have to be afraid to try to open doors of opportunity, because one thing we can be sure of-a door will not open that is not right for us-when we are earnestly seeking God’s will.

Marlene finished her book, queried forty-one publishers and spent a ton on postage. Not one bought her book. But she had God’s Word on it. She had a piece of the rock to stand on, and she knew it was His calling and His will that her story be told, and published.

Finally, and unexpectedly after six years, a publishing house gave her a contract. She had heard about a new publisher, and then God brought the editor to her local writer’s conference. The circumstances finally lined up with the other two lights–in God’s timing, not her own. And with the promotion of the book, she realized that any time sooner she would not have been able to deal as well publicly with the sensitive nature of her life story.

In the fullness of time, the Israelites obeyed and broke camp to cross the Jordan. The priests carrying the ark went ahead of them. As soon as they reached the Jordan and their feet touched the water’s edge, an act of faith, the water from upstream stopped flowing. It piled up in a heap while the water flowing down to the sea was completely cut off. “So the people crossed over opposite Jericho. The priests who carried the ark of the covenant of the Lord stood firm on dry ground in the middle of the Jordan, while all Israel passed by until the whole nation had completed the crossing on dry ground” (Josh. 3: 16-17).

All the people had to do was to obey and follow the ark–not hurrying or losing focus–not getting distracted by threatening “things” on the right or left-hand sides. God did the rest like slipping a hand in a glove. God is the hand; we are the glove. The hand just moved into the glove. The people of the second generation learned how to allow God to work through them.

Circumstance Must Line Up with the Word and Holy Spirit Counsel

Have you ever seen a firefly at night moving slowly along an evergreen branch? Until it takes the next step along the sprig, the green section underneath cannot be seen. The bright yellow light of the firefly is much like God’s Word is to us, for “it is a lamp unto our feet and a light unto our path” (Ps. 119:105). Amanda and Mark’s story shows how we cannot know God’s guidance until we start taking steps and persist in trusting God with the results.

Amanda and Mark needed a lot of guidance in how to make children a part of their marriage. In the very beginning of their search for adoption agencies, a friend asked, “Do you think an international adoption would be the way to go?” Deciding it would be too expensive, they tried a private attorney. Up-front fees were less expensive and they heard it was easier; however, after two failed adoptions and eighteen months, they were discouraged and gave up that idea. Next, they tried foster parenting classes. After the first class, Mark was not interested.

Amanda kept a journal, recording God’s encouraging words to her, along with her disappointments. The main Scripture that kept them going was Proverbs 3:5-6, “Trust in the Lord with all your heart and lean not on your own understanding; in all your ways acknowledge him, and he will make your paths straight.”

Their thoughts went back to the international adoption idea. They learned it was possible to adopt two children at one time through an agency near them. They checked out references and received positive feedback. They could have two children within one year. “By this time, we just knew that God was directing us this way. People wondered why we didn’t adopt in America. We prayed through the whole process that God would guide us and we just had faith that He was.”28

After paperwork and home visits were completed and flight dates arranged to a Russian orphanage, discouraging problems still loomed. Their scheduled flight in April was cancelled. They had to wait and wait some more. Finally, another date in June. Mark made a determination, “We will not come home without two children.” By faith, they prepared a nursery.

In a city northeast of Moscow, the couple was given a picture of three-year-old Alexey. The minute Amanda saw his picture she knew he was their child. He had Mark’s furrowed brow and a little frown on his face. But, the biggest part was his name. “During the recent Olympics there had been a Russian ice skater named Alexey. I thought it was the most beautiful name and I went around the house saying, ‘I’m going to name my baby Alexey.'”

Circumstance Lines Up for Mark and Amanda

The next day, the Ministry of Education called to say they had another child for them to consider-an infant by their standards. He was two years old, with soft blue eyes, with the same name Alexey. With no reservations, they knew God had given them their family. When circumstances lined up, with confirmations, they did so quickly.

God not only guided them to their children, but he provided for them. Adoption tax credits made the adoptions affordable. A few years later they went back for a beautiful three-year-old girl named Annalyse, making their family complete.

Circumstance is Always the Last Light to Line Up 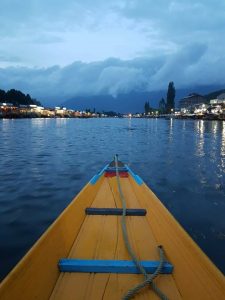 Choices and decisions of a lesser degree that we make every day are made so much easier with the three harbor lights in mind. Anita had a friend who was threatening her husband with divorce after learning of his infidelity. They had a two-month-old baby boy. She knew she needed to share God’s love with Sally, which she had never done. Her heart pounded and tears came to her eyes every time she thought about it. God’s Word was very clear she should go and share (see Matt. 28:19-20). She knew she had the Holy Spirit’s witness in her heart, so she asked for confirmation, “Lord, if you want me to go to Sally and tell her about how I became a Christian and that You can save her marriage, please let her call me first; then, I’ll know you are leading me, without a doubt.”

Within hours, the phone rang, “Hello Anita, this is Sally.” The final harbor light of circumstances lined up. Anita was obedient, and through her fear, trusted God to give her the words to share. That was the last time Anita had contact with Sally, but she learned that she chose to stay with her husband. They accepted the Lord as their Savior, moved from town, changed jobs, got into the Church, and reared nine children.

As the pilot of a ship trusts in the captain, we can trust our Shepherd to lead us. He is the one who qualifies us, and says, “I will lead the blind by ways they have not known, along unfamiliar paths I will guide them; I will turn the darkness into light before them and make the rough places smooth. These are the things I will do; I will not forsake them” (Isa.42:16).

When we follow Jehovah-Rohi, we gain experiential knowledge we will have no other way. “Surely goodness and love will follow [us] all the days of [our] lives, and [we] will dwell in the house of the Lord forever” (Ps. 23:6).