The Lord had revealed a number of things concerning this vision. Still, many questions remained, like: what does it mean to me now; how do I fit in? A package came to my door correctly addressed to the pastor of The Prayer House in Arkansas City. Why had it come to me? I called her. She told me about a conference they were having the next week. I decided to go the last night on Wednesday. It was there I learned about Ruth and the answers to my questions.

I will never forget that December night. Joy filled my heart as large snow flakes fell softly on my black coat when I entered the church. I was overwhelmed as I heard Pastor Varner give the meaning of the names of the characters in the book of Ruth. They revealed to me the feet of Jesus.

In this chapter, we will look at what Ruth did to get the attention of her Bridegroom that made Him want to bring her unto Himself. And, like Ruth, we will find we must turn to Bethlehem, Judah, to find God, because we are the feet—the last generation—in the body of Christ at harvest time at the midnight hour. This turning  in repentance is the first step the body of Christ took. The next three steps, repeated over and over, are addressed in the next and last module.

Meaning of the names in the book of Ruth

The book of Ruth comes alive when we know the meaning of the names of each character. They are:

During Ruth’s time, the judges ruled. There was no king in Israel. Men did what they wanted in their own eyes. Elimelech moved Naomi, his beautiful, “pleasant” wife, and their two sons from Bethlehem during a famine, to the land of Moab—outside the promised Caanan land.

He did not live up to his name, “My God is King,” in trusting God to meet their needs. He was related to Boaz (symbolic of Jesus Christ) of Bethlehem, Judah, a man of great wealth who had many hired hands. He could have worked for Him, or it may have been he had wealth he wanted to keep, rather than to share it with others during famine.

Moab is the place where you go when you don’t want to submit to the LORD’S authority, face your past, present or future situations, change, grow or mature. It is a place to hide; a place of death. Elimelech died. The two sons grew up and married Moabite women, Orpah and Ruth. Both sons died in Moab.

After a total of ten years, Naomi and her two daughters-in-law set out for Bethlehem because they heard a sound—God had provided for His people there. It had rained. On the way, Naomi told the girls to return home and find a husband. She said, “I am too old to have another husband . . . It is more bitter for me than for you, because the LORD’S hand has gone out against me!” (Ruth 1:12-13). She changed her own name to Mara, meaning “bitter.” 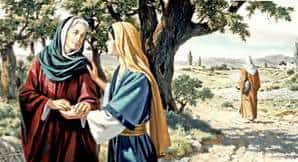 Orpah “turned her back” on Naomi and where she knew God’s presence was. She could not leave her people or her gods, her past, or tradition, to find Truth. On the other hand, Ruth said to Naomi:

“Don’t urge me to leave you or to turn back from you. Where you go I will go, and where you stay I will stay. Your people will be my people and your God my God. Where you die I will die, and there I will be buried. May the LORD deal with me, be it ever so severely, if anything but death separates you and me” (Ruth 1:16-17).

Naomi and Ruth arrived in Bethlehem at the beginning of harvest

Ruth decided to go to the fields and pick up the left-over grain behind anyone in whose eyes she found favor. Boaz arrived from Bethlehem and greeted the harvesters, “The LORD be with you!” (Ruth 2:4).

“The LORD bless you!” they reciprocated.

Boaz noticed Ruth and told her to stay in his field, close to his servant girls. He told his men not to touch her. At this, she bowed her face to the ground, and exclaimed, “Why have I found such favor in your eyes that you notice me—a foreigner?” (Ruth 2:10).

Boaz explained he knew all about her. He knew she had left her father, mother and homeland to live with a people she did not know, and said, “May the LORD repay you for what you have done. May you be richly rewarded by the LORD, the God of Israel, under whose wings you have come to take refuge” (Ruth 2:12).

One day, Naomi decided it was time to help Ruth find a husband. She gave Ruth this directive: wash and perfume yourself, put on your best clothes, and go to the threshing floor. When Boaz lies down, “note the place where he is lying. Then go and uncover his feet and lie down. He will tell you what to do” (Ruth 3:4).

Ruth approached quietly, uncovered his feet and lay down. In the middle of the night something startled the man, and he turned and discovered a woman lying at his feet.

“I am your servant Ruth,” she said, “Spread the corner of your garment over me, since you are a kinsman-redeemer.”

“The LORD bless you, my daughter,” he replied. “This kindness is greater than that which you showed earlier: You have not run after the younger men, whether rich or poor. And now, my daughter, don’t be afraid. I will do for you all you ask. All my fellow townsmen know that you are a woman of noble character.”—Ruth 3:7-11

The next day, as was custom, Boaz met with the relative who was first in line to buy the property of Naomi (and Ruth) in order to maintain the name of the dead. The relative was willing until he heard he would need to marry the Moabitess, so Boaz legally claimed her and married her as she had asked.

The LORD enabled Ruth to conceive and she gave birth to a son, Obed, meaning “He who worships.” Obed became the father of Jesse, who was the father of King David. Twenty-eight generations after David, Joseph (of the lineage of David) married Mary, mother of Jesus—the promised Messiah.