THE BLESSINGS OF EL SHADDAI – continued

Isaac blessed Jacob with these words, “May he [God Almighty] give you and your descendants the blessing given to Abraham, so that you may take possession of the land where you now live as an alien, the land God gave to Abraham” (Gen. 28:4). With this promise, Jacob knew he would someday return from his Uncle Laban to claim possession of God’s purpose for his life. We know now that he became the father of twelve sons who would personally possess the land of Canaan that would become known as Israel. In fact, God changed Jacob’s name to Israel. [This is only one of many times the Israelites left their homeland to later reclaim it.

Denise and Joe had been trusting God for their future and life purpose. Jeremiah 29:11 meant much to them, “‘For I know the plans I have for you,’ declares the Lord, ‘plans to prosper you and not to harm you, plans to give you hope and a future.’”

After Joe’s ten-year managerial job ended, he struggled to find something that utilized his skills and desires. In four years he had four jobs. Denise kept encouraging him and together they kept standing on the promise that the Lord is able to restore the years the locusts have eaten (see Joel 2:25). Seeking the Lord’s direction and purpose, they felt God shepherding them to move, but not knowing where.

The promise of a homeland refers also to  heaven of which the Promised Land of Canaan symbolizes. The word crossing, as of crossing the Jordan River (see Josh. 4:1), is the Hebrew word âbâr, which means “to pass over . . . to go beyond . . . to depart . . . to impregnate . . . going beyond a certain physical point.”[1] It also symbolizes entry into our destiny purpose and God’s best for our lives here on earth—going beyond our present state, possessing all God has for us. 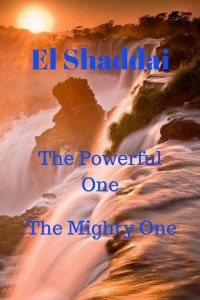 Jumping from Jacob’s story to the story of Moses, we learn that in obedience to The Almighty, Moses returned to Egypt where he tried to persuade Pharaoh to free the people. To Moses, El Shaddai reveals himself as The Powerful One, the Mighty One, and changes, or replaces, his own name to “Jehovah,” [Chapter 22 of this book explains this in-depth name of God] with the same self-sufficiency as El Shaddai. The fullness of time had arrived for Jehovah also, because now, through Abraham and his descendant’s obedience and influence—Moses and the children of Israel (Jacob)—He obtains greater influence upon the earth. With increase in influence, comes a name change. The Lord, meaning Jehovah, said to Moses,

“I am the Lord. I appeared to Abraham, to Isaac and to Jacob as God Almighty, but by my name the Lord, I did not make myself known to them. I also established my covenant with them to give them the land of Canaan, where they lived as aliens. Moreover, I have heard the groaning of the Israelites, whom the Egyptians are enslaving, and I have remembered my covenant.”   —Exodus 6:2-4

He remembered His covenant—the blood.

The Almighty promises deliverance from bondage—spiritually and physically on this earth. That is His job, His purpose, and His desire. But, the deliverance of the children of Israel did not manifest until the most important last plague occurred. The Lord, through Moses, instructed them to sprinkle blood over the doorposts of their houses—from a sacrificial lamb. The blood protected them from judgment that Passover night when the death angel took the life of the firstborn sons of Egypt, including Pharaoh’s son. All this pointed to Jesus, our sacrificial Lamb, and the deliverance from sin, death, and bondage we have through his blood.

Denise and Joe felt they were in limbo land, much like when the children of Israel traveled around the same mountain, getting nowhere. She went back to work after six weeks at home with the baby—while Joe was still on unemployment. In the evenings, she took over baby care, fell into bed at 11:00 p.m., and awoke at 5:30 a.m. to care for baby again.

During this time Joe made a number of trips to Texas to take a test to get on the railroad, driving his only mode of transportation, his motorcycle. He passed the test three times, but could not get hired. Unemployment ran out. He was offered another dead-end job. He and Denise finally had enough; it was time to take a leap of faith.

Friends in Texas offered Joe a place to stay, so Denise pushed him out the door and stayed behind to sell the house. After only eight days, Joe was hired on temporarily with Northwest Pipe Company—with great pay and benefits. After two and one-half months and permanently hired, he rented an apartment and went back for Denise and the baby. They left town on a Sunday; the house sold on Monday. This time they were driving a pickup truck that a friend traded him for his motorcycle. Proceeds from the sale of their house paid their debt. The best part: Denise was now able to stay at home with their year-old daughter.

El Shaddai’s Purpose: Shadow of Protection for His Children 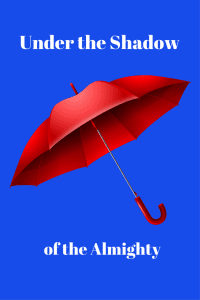 One of the most comforting verses in the whole Bible comes from Psalm 91:1, “He who dwells in the shelter of the Most High, will rest in the shadow of the Almighty.” This shadow can be equated to the shadow the Lord gave the children of Israel in the cloud by day to give them shade to protect them from the hot sun of the desert. It can also be thought of as the protecting wings of a mother hen as she shelters her chicks from the storm. Referring to Chapter 5 of this book, the shadow is the protecting red umbrella dipped in the blood of the Lamb over our heads. Psalm 91:1 is one of the forty-eight times where the Almighty (El Shaddai) appears in the Old Testament. He is our Protector.

Many stories of God’s protection can be told, but for Joe, it was with his motorcycle. On one of the trips to Texas, Joe’s motorcycle had mechanical problems. It just so happened to be in a place where a mechanic was able to help him. All Joe had to do was buy the part, and the man told him how to put it on, saving Joe labor costs, and he safely made his time deadline while being protected on the interstate highways—carried by El Shaddai.