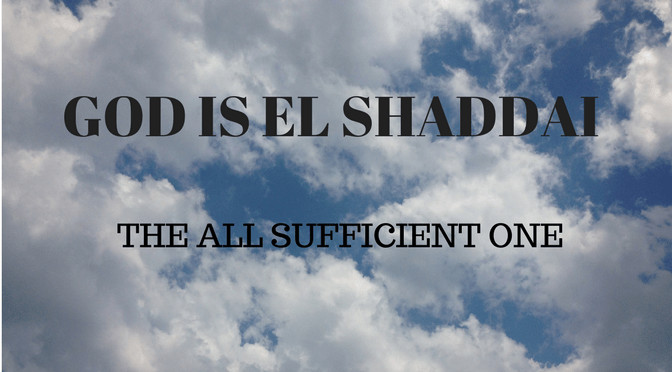 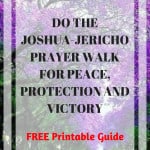 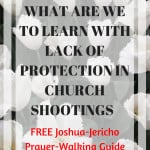 With massacres of Christians on the rise, especially as they are gathered together in their churches, there is an answer. Lack of protection doesn’t have to happen to you and me.

Christians are given the powerful promise of protection of El Shaddai, the Most High God Almighty, in Psalm 91:1: “He who dwells in the secret place of the Most High shall remain stable and fixed under the shadow of the Almighty [Whose power no foe can withstand]” (Amplified).

As with any promise of God, it is only as good as we believe it and utilize it in faith. Notice it says ‘dwell’ in the secret place. The blessing of protection is not automatic. Faith without works is dead; or without action on the promise, the promise is dead. 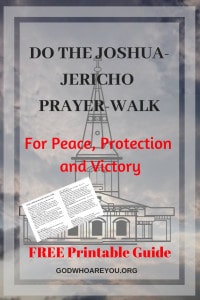 Meshing the stories in Luke 22, Matthew 26 and John 18, Jesus shows us this reality of protection from Him which comes in two forms. He had just told Peter that Satan had asked to sift him as wheat, but Jesus prayed that his faith would not fail. Verse 35 of Luke 22 begins with Jesus asking the disciples if they lacked anything when He sent them out without a purse, bag or sandals. They replied, “Nothing.”

He said to them, “BUT NOW, if you have a purse, take it, and also a bag; and if you don’t have a sword, sell your cloak and buy one. . . .” He was concerned about their own protection. As He was arrested, He said to the soldiers, “If you are looking for me, then let these men go.”

“That is enough,” Jesus replied.

This takes place at the midnight hour immediately before Jesus is arrested. As the soldiers come for Jesus, Peter, who had a sword, drew it and cut off the ear of one of them. Jesus restored the ear of the soldier and responds by saying something that may seem contradictory, “All who draw the sword will die by the sword.”

Jesus meant that Peter drew the sword first without any physical threat to himself.  In other words, “not to live by the sword.” Peter was impulsive. At the darkest hour, Jesus was saying, “Be prepared naturally.”

With massacres of Christians on the rise, especially as they are gathered together in their churches, there is an answer. Lack of protection doesn't have to happen to you and me. Click to Tweet

The contrast Jesus made in the above passage between natural and supernatural was that the disciples were supernaturally protected and provided for as they went out in obedience to His command.

Probably the most profound example of supernatural protection is at the first Passover in the Exodus. The children of Israel were supernaturally protected and provided for as they were delivered out of Egypt in accordance to the Lord’s command.

The Lord’s command was to take the blood of a first-born lamb, without defect, and swipe it on the sides and tops of the doorframes of their houses. In the last of the ten plagues to hit Egypt, their first-born was spared while those of the Egyptians were slaughtered by the destroyer–at midnight.

Likewise, we are protected supernaturally with the Blood of Jesus.
We can do the same thing the children of Israel did TODAY by swiping–or applying, pleading–the Blood of Jesus. He was slain as the first-born Lamb of God Almighty, who had no defect.

HOW do we apply the Blood of Jesus? 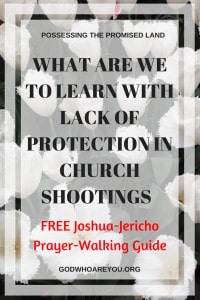 A  certain man applied the Blood of Jesus by prayer walking his property. He prayed regularly as he walked around his house. When a fire threatened his property, it stopped right at the line he drew with his feet in prayer. It’s like he created a controlled burn with the fire of the LORD the width of his body, so that when the fire reached that place, there was nothing to burn.  It could go no further.

Other examples of supernatural victory

She shares stories of supernatural protection as Christians applied the blood of Jesus with Divine warning before the San Francisco earthquake in 1906.  However, here’s one from  Pastor Brenda Steen. In 1971, she learned about the power in the Blood and preached it to her and her husband’s congregation.

The Lord told her one Sunday night to make much of the Blood. A powerful earthquake awoke her at 4:31 a.m. a few hours later as she heard her words from the night before, I don’t care if we do live in Southern California. I don’t care if my house is on top of a fault line; my house will not be destroyed!

As it turned out, the Steen’s house had only one broken vase and a few cosmetic hairline cracks. Houses on either side lost much and suffered structural damage. Books were still on the shelves at the church. Members in the congregation heard Brenda’s voice with the words she spoke as the quake hit, and  they were protected as well.

Do the Joshua-Jericho prayer walk for peace, protection and victory 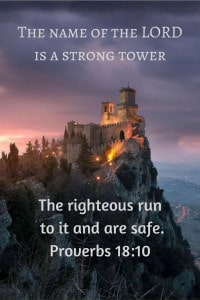 Our church, as a congregation, is planning to pray the JOSHUA-JERICHO PRAYER-WALKING GUIDE around our property. It is a seven-day guide of twelve Hebrew names of God divided into six days. The seventh-day suggestion is to pray all twelve names with praise.

At the first Passover in Egypt, the LORD directed Moses to have the people come together on the first day to hold a sacred assembly and another one on the seventh–throughout all generations. The Passover is seven days. The walk around Jericho took seven days.

We are handing out the prayer guides to the whole congregation on a Sunday, having them pray the first six days at home as they apply the Blood over their homes; then, come back the next Sunday to prayer walk the property and pray all twelve Hebrew names of God.

The children of Israel experienced the Lord in a supernatural way – with natural provision. They were armed and ready for battle as they entered the Promised Land. Jericho’s walls fell supernaturally on the seventh day that they marched around the city. In the end, the people shouted at the sound of the trumpets, and the walls collapsed, so every man charged straight in, and took the city. 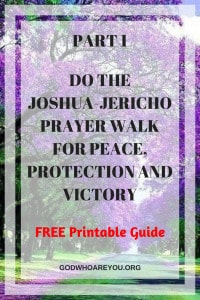 What proactive protection measure have you decided you should make? if you missed the Prayer Guide, find it HERE>> JOSHUA-JERICHO PRAYER-WALKING GUIDE