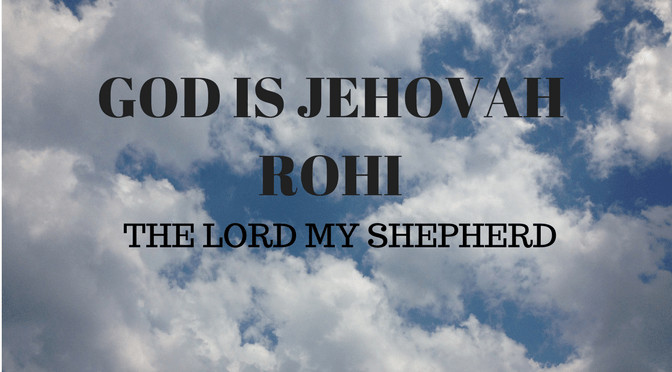 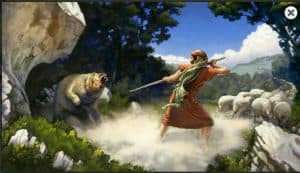 Sheep are unable to protect themselves. They have no claws, no horns or sharp teeth, and are usually weighted down with thick wool. They are easy prey, helpless and timid creatures, especially the little lambs.

A man was visiting a Scottish sheepherder’s ranch. His host met him at the railroad station, and on the long drive out to the ranch the visitor noticed the old shepherd was heavy of heart. The man said,

“You seem so downcast. What is wrong?” Tears welled up in the old shepherd’s eyes.

“Well, I lost sixty-five of my best lambs last night. Wolves got in.”

“And how many sheep did they kill besides?

The shepherd looked surprised. “Sheep? Don’t you know that a wolf will never take an old sheep so long as he can get a lamb?”4

This story confirms the thief is after our children, as Kim’s story revealed to us earlier. This story also reveals how much our Shepherd cares for us.

When possible, sheep are kept in a pen at night. A visitor to the Holy Land found a sheep pen. He said to the shepherd guide, “There must not be any wild animals around here at all because I notice that on your sheep pen there’s no gate.”

The shepherd replied, “That opening is my bedroom where I sleep at night.”5

Jesus says, “I am the gate; whoever enters through me will be saved . . . I am the good shepherd. The good shepherd lays down his life for the sheep” (John 10:9, 11). Jesus further explains that when the wolf attacks, a hired hand will run away because he cares nothing for the sheep. The reason: he does not own them.

When Jesus laid down His life for the sheep, He did it for all mankind. He owns all the sheep of his pasture. Jesus is the only eternal gate to heaven. He was the only legal sacrifice for sin! Those who never choose to accept what Jesus did for them are stolen from Him by the evil wolf, or false prophets.

Jesus says, “The thief comes only to steal and kill and destroy. I have come that they may have life, and have it to the full” (John 10:10). He is the only one who cares enough to be with us when we, in our defenselessness, need Him. 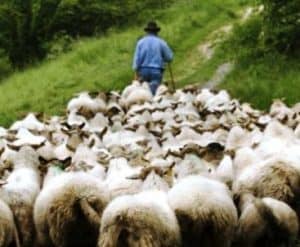 A pastor and his wife went to Israel. They were told the story of two Bedouin shepherds who crossed paths, each with their own flock of sheep. Hundreds of unbranded sheep collided together. It seemed hopeless to get them separated. After much confusion, each shepherd went a distance down the road in two separate directions, turned and called his sheep. Instantly, they polarized as each headed toward the voice of its shepherd. They knew that voice.6 “They will never follow a stranger; In fact they will run away from him because they do not recognize a stranger’s voice” (John 10:5).

Sheep follow a good shepherd; they cannot be driven. Ezekiel 34 is a whole chapter in the Bible dedicated to what God thinks about shepherds who use sheep for food rather than feeding the sheep. In the Old Testament, God says he will hold them accountable and will remove them from tending the flock and He will look after them himself (see Ezek. 34:10-11). In the New Testament, Jesus says, “My sheep listen to my voice; I know them and they follow me” (John 10: 27).

Sheep follow the Good Shepherd because He knows them. A shepherdess on television was challenged to name each one of her sheep. With the clock ticking, “She had to think hard sometimes, and yet she recognized each sheep and named its name: Daisy, Sally, etc.

To the viewer all the sheep seemed identical with no obvious identifying characteristics. Their faces were perhaps different in very slight ways that only the shepherd had come to know. Or maybe it was their behavior. Anyway, she named each of them as individuals.”7 “I know them,” says the Good Shepherd. 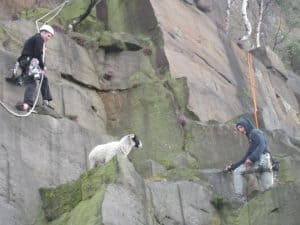 Vegetation on the Highlands of Scotland can be pretty scarce. Yet, on a little cliff, about ten or twelve feet below, one can find a grassy ledge–grass that has not yet been eaten. The smell of that lush grass may lure a sheep to jump, landing on all fours. Once the sheep has indulged himself, his bleating can be heard as he tries unsuccessfully to return to higher ground.

The shepherd does not rush right over to rescue the sheep. He lets it stay down there. He has to wait until all the grass is eaten and the sheep grows thirsty and weak from hunger, until it cannot stand on its own. He knows if he lowers himself over the ledge to get it before then, the sheep will jump to its death.8 The shepherd knows the sheep will run from a stranger, and that the sheep does not yet know him. It if had, it would not have wandered so far.

Unfortunately, “We all, like sheep, have gone astray, each of us has turned to his own way” (Isa. 53:6). We make hasty decisions without consulting our Shepherd guide and then get on the wrong path, even dangerous cliffs and ledges. We get distracted by the notion the grass is greener on the other side, looking to our own way, rather than seeking the Shepherd’s way.

“I myself will tend my sheep and have them lie down, declares the Sovereign Lord. I will search for the lost and bring back the strays” (Ezek. 34:16). David records the same message in his twenty-third Psalm, “He makes me lie down in green pastures” (vs. 2). There are times when He has to make us lie down in order to get our attention, so He can rescue us and restore our souls.

Kay Arthur tells a story in her book, The Peace & Power of Knowing God’s Name, of a young man in Mexico listening to her teach about Jehovah-Rohi. He knew the Lord, but had trouble wandering, getting distracted by one thing or another, walking away from the Lord.

Kay explained how a shepherd could be forced to break the leg of a lamb that would not learn his lesson not to stray. Thus, the shepherd bound up the injury, and carried the lamb in his arms, talking to it and singing to it, until the lamb knew him.

The young man hobbled into class a couple days later with a broken leg and a grin on his face. When Kay asked him what happened he said, “It was the shepherd. He broke my leg.”9 The young man probably broke his leg when performing a reckless stunt of his own choosing. Nevertheless, he perceived his wound as a loving, caring act by the Good Shepherd, because of the Word he had heard, knowing it was for his own good.

We must understand the big picture. We are in a training program, to not stray, to learn to follow Jesus on this earth where satan preys like a wolf on those who choose not to follow. For big and little lambs, the “bread of adversity” (see Isa. 30:20) is the only thing that usually brings the desired result. It is during these times that “He tends his flock like a shepherd: He gathers the lambs in his arms and carries them close to his heart; he gently leads those that have young” (Isa. 40:11). And we are forced to “Be still, and know that [He] is God” (Ps. 46:10 emphasis added). Then, hopefully we will learn to never stray again.

Sheep are Totally Dependent upon the Shepherd 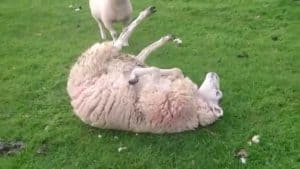 There are times in a sheep’s life when it can become “cast.” Webster defines cast as “something that results as a result of chance.”10

“Often when a sheep is heavy with lamb and heavy with wool, it will lie down on uneven ground and then roll over on its back into a shallow recess. When it does, it’s like a beetle, unable to rise or roll over by itself. On its back, the gases will gather, the limbs will stiffen and it won’t be long before it will die.”11 If the shepherd does not find the sheep at just the right moment, to rub it’s legs and body back to life, the sheep will die.

The shepherd David writes, “Why art thou cast down, O my soul?” (Ps. 42:11 KJV). Cast is translated “to despair.” “Eating is difficult. Sleep is impossible. Unrestrained anger is followed by consuming guilt. Confusion prevails. God is nowhere. Life is over. Unless someone intervenes, we will attempt to turn that feeling into reality.”12

That Someone who intervenes is Jesus who leaves the ninety-nine to rescue the one who needs Him at that point in time (see Matt. 18: 12-14).

When we, like a cast sheep, have experienced the Shepherd’s touch, we can say with the apostle Paul, “And we know that in all things God works for the good of those who love him, who have been called according to his purpose” (Rom. 8:28).