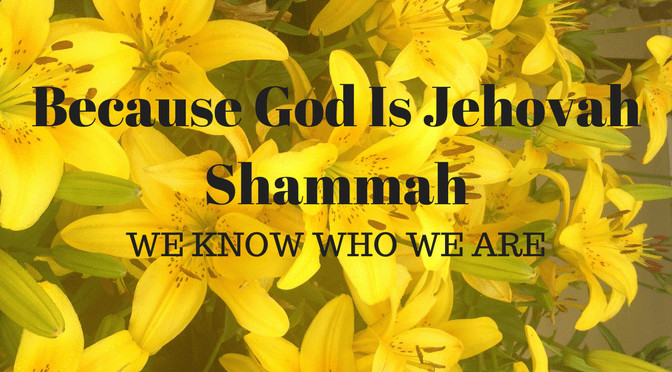 The Scripture for this chapter—overcoming by the blood and by the word of our testimony—was another theme Scripture for our women’s group. However, the last part of it was not on our promotional material. “Not loving our own lives so much as to shrink from death,” means we must face the physical part of death when it comes to following Jesus as His disciple. This initially seemed too hard for our group to bear. Letting dreams die, as an example, is only a spiritual aspect.

Ruth said to Naomi: “May the LORD deal with me, be it ever so severely, if anything but death separates you and me” (Ruth 1:17). This is true commitment. Is our commitment to Jesus Christ this strong? We need to make this decision now before we should ever be faced with it. One member of our group had a vivid dream which brought her to this choice on February 8, 2003. It was Denise. She fell asleep listening to Scripture tapes. She was praying for God to fill her with His Spirit and to change her.

Denise dreamed she was in a huge, tall, apartment-type building. Suddenly, like cell phones, everyone had a small, hand-held computer. She wrote:

On the top floor, people were dressed in blue body suits including faces masked in blue. They were playing a musical type instrument, swaying back and forth. On the back of their heads at the base of their skulls were blue tubes like a vacuum hose leading to a laptop computer in the center of the room. On the screen was another blue screen with a diamond-shaped box that turned slowly; it rippled like when touching water. It was all evil, and addictive like a video game and brainwashing.

My two friends and I were awakened suddenly with yelling to get out of the building—very urgent. On the street, everyone had the same laptop computers. Leaflets were passed out—folded in quarters. Everyone who looked at it seemed entranced.

Back in the apartment was a man watching us very closely. We pretended to be engrossed in the computer, but were not. He put his cell phone away. I grabbed my friend, who had a leaflet, to take her into the bathroom to warn her that this was all evil. As we got to the bathroom, two mean-looking men came out. They had sores all over their faces. In the bathroom, two more men were standing in front of the sink, looking into the mirror. One man ran his hand through his hair and the red hair that was on top of his head was in his hand. He said, “Look, I am a new creation.” And then I saw a razor in the sink and he proceeded to shave the sides and back of his head and his beard and when he was done (like a second later) he started praising God and singing. The guy next to him did the same thing, but he had his hair.

I felt the Holy Spirit come upon me and I wanted to join in, but I stopped myself. A few moments earlier, I looked at my friend and she was just like those men we saw leaving the bathroom. She had sores on her face—looking mean and full of hate. As I listened to the men singing praise, I knew that if I joined in, I would either be killed or put in prison. I chose to join in.

There is no other choice for me. As I make that decision right now, I know that no matter what happens to me, I will sing praises to God and that what I might suffer through will only be short lived. Next, my husband woke me up.

The Lord has given Denise a message for Christians

She is very passionate when she says, “I just want to share something that is deep in my heart. Most people do not realize the persecution of Christians that is going on today. In fact, most people do not even have a clue of the history of Christian persecution and martyrdom. Just going from 33 A.D. thru the year 2000 there have been roughly 69,421,230 Christians who have been martyred for their faith. The surprising number is that 65 percent of this persecution has taken place in the last 100 years.[1]

“It is time to WAKE UP! WAKE UP! Stop sleeping, sleepy Christians. It is time to become REAL with our faith! Be in God’s WORD like never before! Share your FAITH like never before! While we have the FREEDOM to do so! It doesn’t hurt to speak out to protect those freedoms that so many men and women in our history have bled and died for! We don’t know what tomorrow will bring, but we all know that our world is changing and things are not going to be as they once were! We cannot afford to be caught off guard! We must stand together as ONE voice! More importantly we must fight the good fight, keep up the race to the finish and keep the faith! SO WAKE UP, Sleepy Christians! WAKE UP!”