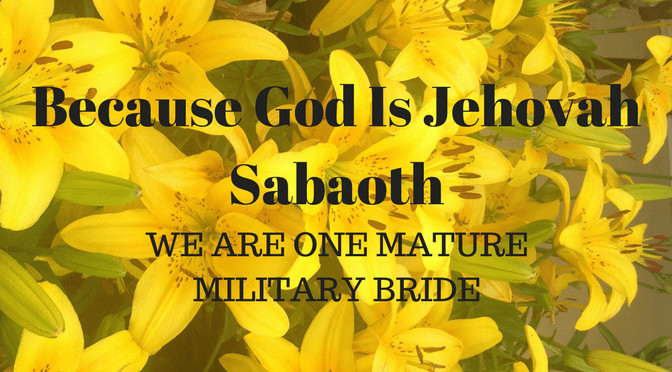 Another meaning of ‘host’, or the Hebrew word tsâbâ’, is derived from the verbal root meaning to wait upon the Lord. This verb appears fourteen times in the Hebrew O.T. The general sense of the meaning of the word is that of rendering service.[1]

Sandstorms bogged down advancing troops outside Baghdad at the start of the Iraqi war. Storms were the worst in 100 years with drenching rain that followed the next day. The troops could not move and had to wait. It was reported they were in a quagmire with dire predictions.

After the storm, the Marine group mired the worst looked out at the plain they were just about to cross. What did they see? Hundreds, if not thousands, of anti-tank and anti-personnel mines had been uncovered by the wind and washed off by the rain. If they had proceeded as planned, many lives would have undoubtedly been lost. As it was, they simply drove around them and let the demolition teams destroy them.

This identical thing happened in October 1973, during the Yom Kippur War. After the Israelites safely got through the mine field, they knew it had to have been the hand of God who brought the mighty wind. It uncovered the mines and quit blowing.

Waiting was an action that brought victory. Waiting on the Lord is no idle pastime. It takes every ounce of fortitude and strength that only the Lord can give to keep on trusting Him. Kurt and Davi M. waited and trusted ten years for their child. Denise and Joe waited and trusted for children at least six years during which God gave them three dreams.

In the first dream, Denise saw Joe and herself in a grassy field with two children between them. One was a little girl of about six years of age with long blonde hair and a little boy beside her of about two years of age. In the second, she was holding a baby in her arms that she knew was her own; a woman was in the bed beside her who had given birth to a baby—who was to be their adopted daughter with the long blonde hair. The third dream was of Denise in a hospital bed holding her own baby. At this writing, Denise had a fourth dream that she was pregnant. Five or six weeks later, she found out she was—and it is a boy.

These people know “those who hope in the Lord will renew their strength, They will soar on wings like eagles” (Isa. 40:31). One of Barbara Watts’ rock of hope in fighting multiple sclerosis was, “Wait and hope for and expect the Lord” (Ps. 27:14 Amplified). She always speaks these encouraging words to others.

The mature Bride makes her husband’s mission her mission

“Do two walk together unless they have agreed to do so?” (Amos 3:3). Francy learned this early in her marriage to Scott who had recently graduated from The United States Military Academy. His assignments created numerous moves in the states and a few moves within Germany—not always in comfortable housing.

Francy was continually forced out of her comfort zone. Depression set in with each move because of leaving friends and family and the inability to pursue her own career in the field of her Biology degree—as a research assistant. She had to start all over again—each move taking about a year to get settled. In the meantime, she took it out on Scott, blaming him, until she understood: this is what he signed up for; soldiering is all he ever wanted to do.

Francy made a decision that if her husband was to be able to do what he was called and trained to do, she had to learn to support him fully. His mission had to become her own. She believed in what he was doing and she knew the only way he would ever be happy was for her to become adaptable. Not being a natural extrovert, she learned to go out right away, make new friends and get involved in the community. She settled in faster and experienced a whole new state and/or country, which became an exciting adventure—especially when running marathons in each state became a new goal.

Francy and Scott’s marriage is not one sided. They have learned to communicate about everything—knowing what to expect from each other. Scott puts family first and considers Fran’s thoughts, including when it comes to where the next move might be. Their marriage has come through the four stages of teamwork to an interdependent relationship—one where each party feels free to “act,” or perform, in the best interests of the team, and if the other responds wrongly, communication solves the problem [co-dependency “reacts,” never acts or responds positively].

Getting to the performing stage was not easy, but worth it, especially when the more difficult time hit—Scott’s mission to Iraq when child number three was on the way. Yet, as tough as this time was, God rewarded them openly, seeming to say, I am in your future. They prayed about this child, and Francy found she was pregnant the week Scott left.

When looking at our relationship with the Lord, do we identify ourselves with His mission?

Have we made the decision to make His mission our mission—putting aside selfish ambition? We have been commissioned by the Lord of hosts to fulfill His mission:

All authority in heaven and on earth has been given to me. Therefore go and make disciples of all nations, baptizing them in the name of the Father and of the Son and of the Holy Spirit, and teaching them to obey everything I have commanded you. And surely I am with you always, to the very end of the age.—Matthew 28:18-20

The only way the Lord of hosts can fulfill His mission of releasing the captives (see Luke 4:18-19), making disciples, and teaching them is through us. Therefore, we have to get out of our comfort zone, place His interests above our own and go in His name—knowing He is in us, one with us.

In one day, cadets of the United States Military Academy at West Point, New York, begin their four-year transformation from civilian kids to military officers. This first day is called “R” (Report) day. In July of plebe year, first year cadets begin their basic training. Their hair is shaved off and they are trained in military protocol by older cadets serving as cadre members. At the end of “R” day, parents are given a detailed drawing of all companies of soldiers so their son’s or daughter’s position can be determined as they come marching by.

Parents sit in the reviewing stand with the commandant. Everyone watches the four portals of Washington Hall that grace the perimeter of the marching “plain,” as four ranks of new cadets appear at once and merge into one long column. All cadets are divided into companies (ranks) of approximately thirty young men and women. When they arrive at the reviewing stand, all cadets’ heads turn in unison to face their commandant; then, in unison all heads turn forward again, and they continue to march around the plain.

Sacred means dedicated or set apart for service or worship of a deity, or devoted exclusively to one service or use—as cadets in training for military service. When they came in view of their commandant, they gave reverence to their leader by turning their heads in unison to face him, much like the geese turned in unison and flew directly into the “Son,” and united with the group high in the sky, or the reviewing stand “cloud of witnesses.”

Therefore, since we are surrounded by such a great cloud of witnesses, let us throw off everything that hinders and the sin that so easily entangles, and let us run with perseverance the race marked out for us. Let us fix our eyes on Jesus, the author and perfecter of our faith, who for the joy set before him endured the cross, scorning its shame, and sat down at the right hand of the throne of God.—Hebrews 12:1-2 (emphasis mine)

On September 11, 2001, New York’s fire department’s chaplain priest was one of the first to step in for the rescue effort when the twin towers fell in New York City. He, along with 343 firefighters and policemen, lost their lives when they ran in while others ran out. The priest was the first of 292 whole bodies to be recovered—out of over 2,700 total who died. His was the first funeral service conducted at the sight where two airplanes hijacked by terrorists struck the towers.

Those who worked the recovery process asked, “God, where are you?” until they found an amphitheater-like opening with a huge metal cross inside. They called the place “God’s House” and talked about the cross from that day forward. They also felt God replied to them, “I’m right in the middle of it.” The cross, discovered on September 13, was their source of hope.

On September 11, 2001, God’s people transformed into soldiers fully dedicated to sacred service because they turned their heads, fixing their eyes on Jesus, to repent, worship and pray to the Lord of hosts saying, “We are your people, who are called by your name. We humble ourselves and come to pray and seek Your face and turn from our wicked ways. We know You promise to hear from heaven, to forgive our sin and to heal our land” (from 2 Chron. 7:14). May it continue!

As any military officer or cadet in training, we are “brethren, consecrated and set apart for God, who share in the heavenly calling, thoughtfully and attentively consider[ing] Jesus, the Apostle and High Priest Whom we confessed as ours [when we embraced the Christian faith]” (Heb. 3:1 Amplified).

If you enjoyed this excerpt from my book, GOD Who Are You? AND Who Am I? I invite you to sign up for my free eCourse of the whole book at the link below: LEARN MORE and join into the adventure of your lifetime! [Another option is to sign up for my monthly blog at the FREE RESOURCES tab. The workbook, leader’s guide and eBooks are also available.]