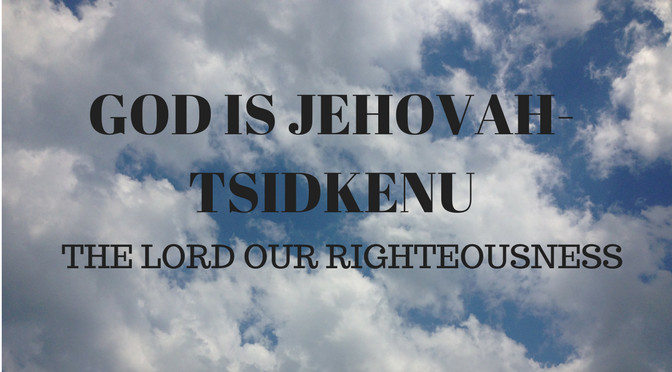 God is Jehovah Tsidkenu: The Lord Our Righteousness

“The days are coming,” declares the Lord, “when I will raise up to David a righteous Branch, a King who will reign wisely and do what is just and right in the land. In his days Judah will be saved and Israel will live in safety. This is the name by which he will be called, The Lord Our Righteousness.” Jeremiah 23:5-6

In the bookstore with Denise, Marie’s mind wandered while the gray-haired lady talked about other angel books worth reading. I hope she’s almost done; my feet are beginning to hurt.

Denise looked at her and smiled. Marie checked her watch and wondered, how much longer is she going to go on talking? I don’t even believe in angels. Then she heard the lady mention the name Jesus. Her mind focused more on what was said, but not totally.

Marie got chills while listening. She had never felt this way before. Who is this Jesus this woman is talking about?

After the girls had prayed with the lady to receive Jesus Christ into their hearts and they were alone, Denise and Marie discussed what had just happened, “Shawn, my younger brother, went to church in Montana where he accepted Christ into his heart. He’s not been to church since we moved in with you. He misses his friends and the love and attention he got from all the families,” said Denise.

Umm . . . What is church all about? Marie had never gone to church, but now she had an urge to read her Bible. Later on she told Denise, “I read through Genesis and some of Matthew and Mark, but I couldn’t understand it.”

“I read a verse that said if you don’t understand what you’re reading, you don’t know Christ.”

“Then I guess I don’t know Christ because I sure didn’t get anything from what I read.”

Marie’s second experience with the Holy Spirit’s seeking her out came two and one-half years later when she knocked on the door of her boyfriend’s house. Jason’s mom answered the door. She called for Jason and took Marie into the living room where they sat down. “Jason used to be so involved in the church when he was in high school, but once he was no longer considered a youth, he quit going. Would you like to go to church with me?”

When Jason came downstairs, he put on his shoes and the two hopped into his car. “Your mother just invited me to go to church with her. Will you come so I don’t feel uncomfortable?” He agreed.

Two weekends later, Marie attended her first church service. She was so excited and nervous. She had no clue what to expect or what to do. She held onto Jason’s hand so tight he thought he might lose it. This Sunday just so happened to be the day that the Lord’s Supper was served. Marie bent over and whispered to Jason, “What do I do with this cracker and juice?”

“This is just a time to pray and ask God for His forgiveness for the sins you have committed.”

Marie looked around at the people around her and noticed that they had their heads bowed, so she bowed her head and asked for forgiveness for her sins that day. Next, was the invitation where Jason’s mother tried to get her to go up front. Scared, she grabbed Jason’s hand and said, “No.” She felt so uncomfortable and had no idea why she was supposed to walk in front of the congregation. Before she could say anything else, the service was over.

“I really enjoyed that service. It wasn’t so bad that I wouldn’t go again. As a matter of fact, I want to go again.” But Jason was not interested, so they never went back.

Marie’s father’s job moved them to another town. The owners of the new company where her dad worked were devout Christians. One Sunday, they invited Marie’s family to go to church with them. Marie was so excited once again to go, to try to find out what church was all about. Why is it on my mind so much to go to church? Why is it so important?

Finally, three weeks after the invitation the family attended church. It seemed like forever to Marie for her parents to finally consent. She went to the college Bible study class. She had no clue what they were talking about, but she did have a desire to learn. The service was okay, so she kept going back.

The next year her mother accepted Christ into her heart. Marie thought: That was such a joyous occasion. So many people crying, including me. But I know there must be something on the other side I’m missing. What is it?

Nearly a month later, Marie walked the aisle of her church. Scared to death of what she was doing, she talked to a counselor in an adjoining room to the sanctuary. The only thing he said to her was, “Do you understand what Jesus did for you?”

“Sure, of course I do,” she said, not wanting to claim ignorance.

The counselor shook her hand and took her out to the congregation to be introduced. What just happened? she thought.

Marie started to read her Bible everyday, went to church and Sunday school and wanted to get more involved. But her heart was not in it. She did not want to give up self to worry about anyone else. I have enough problems of my own, she thought to herself; but it left her miserable, depressed and down on herself. She thought, I really don’t like who I am.

Finally, she talked to her Sunday school teacher who put her in touch with a Christian lay counselor. Marie saw her for one month, but did not feel like she got anything from their meetings and quit going.

Meanwhile, a guy she had known came back into her life. He and two of his friends invited her to share an apartment with them. Marie knew this was something God would not like. She had made a vow to herself to never have sexual relations with anyone until she was married. The night she was to move in, God spoke to her heart that she was choosing against His ways. She sat outside the door of the apartment for an hour crying. But she made the choice, “I don’t want to sleep on the sofa at home anymore.”

Marie quit having quiet times with the Lord, but did go to church when her boyfriend was working and she had nothing else to do. He refused to go with her, and she grew possessive of him which brought about their break-up within six months. She went home to live with her parents, and shared a room with her little brother–at least she had her own bed now.

Marie’s struggles were no different than anyone else’s from past generations until today. Why could she not live as she desired? She did all the right things. She read her Bible, went to church, knew the right words to say and even prayed, but still she was miserable.

What Does Jehovah Tsidkenu Our Righteousness Do? 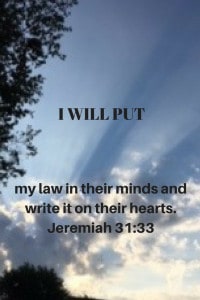 The problem lies in the difference between the Old Covenant and the New Covenant of the Bible. The answer lies in the blood of Jesus Christ that ties the two covenants together. The book of Jeremiah in the Old Testament (Old Covenant) helps us to begin to understand this dilemma.

Jeremiah is referred to as the “weeping prophet,” because of his suffering; no one would listen to him. God called Jeremiah at a young age, probably twenty, to give His messages to the Jewish people who lived in Jerusalem in the land of Judah. He saw the sin of the land increasing and the burning of incense to the Queen of Heaven. The people no longer worshipped the one true God, the God of Abraham, Isaac and Jacob. Instead, they continually told Jeremiah that God was not speaking through him and that he was lying to them.

But the word of the Lord did come to Jeremiah. He went to see a potter at work. The pot being shaped from clay was marred in the potter’s hand. So, the potter just formed it into another pot. The Lord spoke to Jeremiah’s heart and asked him to say to the people:

Like clay in the hand of the potter, so are you in my hand, O house of Israel. . . .I am preparing a disaster for you and devising a plan against you. So turn from your evil ways, each one of you, and reform your ways and your actions. But they will reply, “It’s no use. We will continue with our own plans; each of us will follow the stubbornness of his evil heart.” Jeremiah 18:6, 11-12

God gave Jeremiah the ability to see beyond the pending disaster with a message of hope:

“The days are coming,” declares the Lord, “when I will fulfill the gracious promise I made to the house of Israel and to the house of Judah. In those days and at that time I will make a righteous Branch sprout from David’s line, he will do what is just and right in the land. In those days Judah will be saved and Jerusalem will live in safety. This is the name by which it will be called: The Lord Our Righteousness.”  Jeremiah 33:15-16

The Hebrew name for “The Lord Our Righteousness” in this last verse is Jehovah Tsidkenu. Tsidkenu comes from a Hebrew verb meaning to cleanse, to be straight, to be just, to be true, upright, or in the right.1 Jeremiah knew that God would preserve King David’s line and would send a son of David to be the Messiah who would reign as king forever. Luke’s gospel tells about Jesus, that “The Lord God will give him the throne of his father David (Luke 1:32),” whereas Matthew says Jesus will “. . . save his people from their sins (Matt.1:21).”

After listening to Jeremiah, the people decided, “Each of us will follow the stubbornness of our evil heart.” God knew this would never change. His plan from the very beginning of time was to bring a New Covenant, one written in the heart:

“This is the covenant I will make with the house of Israel after that time,” declares the Lord, “I will put my law in their minds and write it on their hearts. I will be their God, and they will be my people . . . For I will forgive their wickedness and will remember their sins no more.” Jeremiah 31:33-34