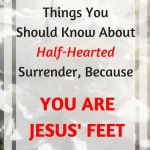 WHAT MORE DOES BEING JESUS’ FEET MEAN TO US?

Ruth got the attention of her bridegroom. Having this understanding of what it means to be Jesus’ feet, and then taking the next steps, will get the attention of our Bridegroom Jesus. Word quickly got back to Boaz about Ruth. He said, “I’ve been told all about what you have done . . . how you left your father and mother and your homeland and came to live with a people you did not know before” (Ruth 2:11).

Ruth’s devotion and worshipful, loving, committed way of life affected everyone she knew and reached all the way to the Throne Room of God. Therefore, when we turn from Moab of half-hearted surrender, we will get our LORD’S attention.

In the OPEN VISION the LORD gave me, nothing happened until the body turned. When it turned, it moved, and it kept on going. The early church was at a critical crossroads. So much was at stake. They were working together to establish the body of Christ on earth. Likewise, we are working together to see the fruit of their labors—the Church—make it to the next level, then the next and the next—JUST AS THE GEESE KEPT SPIRALING HIGHER AND HIGHER. And, all who have gone before are waiting, watching and pulling for us.

A disturbing story unfolded among that early church we must take seriously. They shared of their possessions, sold property, and it was divided as anyone had need. They were of one heart and mind, and one purpose. Ananias and his wife Sapphira sold a piece of their property, but they were deceptive in their giving. They laid the money at the apostles’ feet, but secretly held some of it for themselves.

They lied, saying it was the full price for the land. We know this because Peter accused Ananias of lying to the Holy Spirit and saying, “‘Didn’t it belong to you before it was sold? And after it was sold, wasn’t the money at your disposal? What made you think of doing such a thing? You have not lied to men but to God’” (Acts 5:4).

At that, he fell down and died. About three hours later, Sapphira arrived. Peter asked her, “‘Tell me, is this the price you and Ananias got for the land?’” (Acts 5:8).

Peter asked her how she could agree to test the Spirit of the LORD. He told her the feet of the men who buried her husband were at the door and would carry her out as well. She fell down dead at Peter’s feet.

Partial obedience carries with it a death sentence.

The turning of the body means turning from sin to dedicate oneself wholeheartedly. “As obedient children, do not conform to the evil desires you had when you lived in ignorance. But just as he who called you is holy, so be holy in all you do; for it is written: ‘Be holy, because I am holy’” (I Peter 1:14-15).

A certain man came to accept Jesus Christ as his Savior, but he was not living a holy life. Suddenly, in a vision the Lord showed him his heart and then his feet. One foot was of the world and the other in the church. The Lord showed him if he married his fiancé he would have four children and be divorced. He made the choice to completely surrender and become Jesus’ disciple.

Where are your feet? Our feet are to be in the world, not of the world, because we are sent into the world (see John 17:19).

Know Who We Are And Get On The Offensive Team

Willa Cable is a lady who knows who she is and is not afraid to speak what she believes.  She knows what surrender means. Her story demonstrates how we are co-laborers with angels in the harvest. Her husband Charles broke his back. Before recuperating from that surgery, his appendix ruptured. The doctor told her to call in the children, “Charles is gravely ill and will not make it through the night.”

That night, Willa prayed and read her Bible. Second Chronicles 16:9 spoke to her—about the eyes of the LORD moving to and fro throughout the earth to show Himself strong to those who are loyal to Him.

“Lord, I’m going to be loyal to You. I know You heal. You have helped us through all the other valleys of our life and You’ll help us through this one, too.” She fell asleep.

Early the next morning, a preacher she knew who was visiting another person in the hospital shook her awake and said, “How can you sleep? Didn’t you hear that doctor say your husband is going to die?”

“My husband is not going to die. Don’t you know the Lord Jesus?”

“I’m a preacher. Come on downstairs for a cup of coffee. We have to talk.”

Willa eventually relented and went downstairs to the cafeteria with him, and repeated her question, “Do you know the Lord Jesus?”

“I asked if you knew Jesus.”

“I asked if you knew Jesus. I don’t know what you’re preaching, but it’s not the gospel.”

Just then, a hand rested on the man’s shoulder. Willa looked up and a man dressed like a priest said to the ‘preacher,’ “You need to listen to this lady.”

The preacher got up and exited the building. Willa never saw him or the priest again.

Willa was not afraid to take the offensive stance and leave the results to God; so must we.

John the apostle gives a detailed, striking description of our resurrected LORD’S feet in hisRevelation vision of Him. A voice was speaking to him, then John said,

“Having turned I saw seven golden lampstands (churches); and in the middle of the lampstands one like a son of man, clothed in a robe reaching to the feet, and girded across His breast with a golden girdle. And His head and His hair were like white wool; and His eyes were like a flame of fire; and His feet were like burnished bronze, when it has been caused to glow in a furnace, and His voice was like the sound of rushing waters.”—Revelation 1:12-15 NASB (emphasis mine)

After John turned, he saw Jesus in all His glory; so will we. When we look into his eyes, like a flame of fire, we will catch on fire. The fire travels all the way through the river of life from around the throne of God, and down through the portal of heaven where the great cloud of witnesses are waiting to greet us. The fire makes its way to the very bottom of His feet that rest on the earth, which is His footstool (see Isa. 66:1).

Each foot contains 7,000 nerve endings radiating from the whole body making the feet highly sensitive and burning to see souls saved. We, as His feet, will be ignited like flames of fire and angels’ wings will fan those flames (see Heb. 1:7). Therefore, we must use a sharp pair of scissors and trim our wick so our flame will burn brightest.

We have no Noah’s ark; we have The Rock to stand on as we praise and worship our Redeemer. That Rock will very soon strike the feet of iron and clay at the bottom of the statue King Nebuchadnezzar saw in his dream (see Daniel 2:31-45). All pieces will crumble as to a threshing floor. The reunited Roman Empire will be broken into ten kingdoms [ten toes] that will rule simultaneously, but we will see Jesus face to face. Our worship lifestyle, watching for His appearing, will lift us through the heavenly portal as we overcome gravity forever.

We have been tried as by fire. Our next tears will not be for ourselves but for those who do not make the right choice. At the same time, we will run and not grow weary by staying at His feet (see Isa. 40:31). We will have great joy in harvesting as co-laborers with Jesus and His angels to the point we will glow as burnished bronze—polished to perfection, healthy and very much alive—the Bride without spot or wrinkle (see also Eph. 5:27).

“Therefore, since we are surrounded by such a great cloud of witnesses, let us throw off everything that hinders and the sin that so easily entangles, and let us run with perseverance the race marked out for us. Let us fix our eyes on Jesus, the author and perfecter of our faith . . . .” (Heb. 12:1-2). 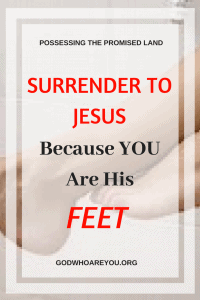