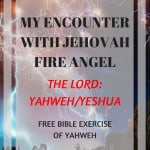 It was March 11, 2005, the day of my encounter with a true live angel, although he didn’t look like it. This day was before our interdenominational women’s meeting. I had been studying the name Jehovah—Yeshua, (Ye SHU a) Jesus, and how fire symbolizes His presence.

This Friday while at work, I heard about the fire that was destroying the 140-year-old historical downtown buildings. I left early at 4:00 p.m. When walking down the half-mile basement employee-parking hallway, I suddenly heard the click, click of hard-soled shoes coming behind me, then a man’s voice saying, “Have you heard? Fort Scott is on fire!”

I looked down and saw, black, patent-leather shoes that were making all the noise, then I looked up, and up, and up, at what had to be a seven-foot tall man—slender, black-haired, and handsome. Not interested to hear my reply, he hurried ahead of me to the employee doorway. I was astonished at his height, and wondered that I’d never seen him before. He had to be an employee to be leaving at this door. I wanted to see if he swiped out with a name badge, but I couldn’t catch up to him. I walked out to the parking lot and there he was, standing still, looking north toward town. Wanting to get home, I hurried past him toward my car.

The man spoke again. He said, “Come over here and you can see the flame; right there between those trees.” Backing up and getting as close to him as I dared, I looked where he was pointing. I could see the flame—with black smoke billowing from the top—that would destroy so much of downtown and bring national attention on the news.

Since the man seemed intent on talking to me, I felt I should say something to him. As I opened my mouth, he left again, stopped at a car, but did not get in. He ducked his head, watching me. Not wanting to embarrass him by my watching him, I hustled, jumped in my car and took off, heading back to where he was. I had to see what kind of car this tall guy would drive out of there . . . no car left that parking lot!

I asked the Lord, “Was that an angel?” I thought I’d better take a closer look at that fire. Contrary to radio announcements not to go downtown, I drove downtown. I could see nothing, no flame whatsoever—not even smoke. I realized the best place in Fort Scott to see that fire was from the hill south of town—that employee parking lot on the hill. Inwardly shook, I told God, “If no cause for that fire can be found, then, I’ll know that was an angel.”

About a week later, the newspaper said that Investigators from the Kansas State Fire Marshal’s Office and the U.S. Bureau of Alcohol, Tobacco, Firearms and Explosives National Response Team examined the area said “we leave a determination of ‘undetermined.’”

The headline read, “Investigators rule out arson, say cause unknown.”

Still . . . what did it all mean? Why had the angel pointed out the flame?

The next day, Willa Cable gave her testimony at our meeting about her house burning to the ground. They discovered the melted lightening rod and their picture window reduced to globs of melted glass; they made nice paper weights.

It wasn’t until I uncovered the feet of Jesus, while writing the next chapter, that I was able to pull it all together.