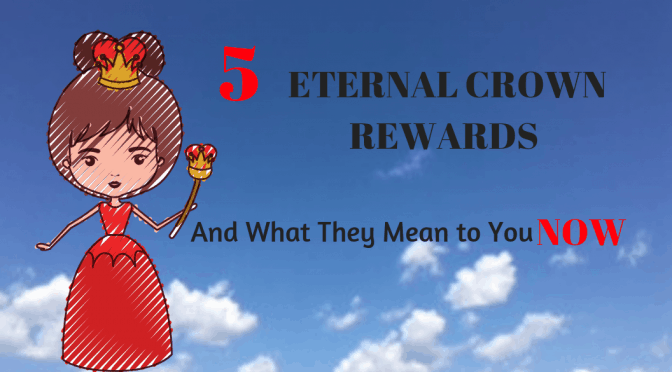 Francy married an Army Lieutenant. His assignments created numerous moves in the states and abroad, let alone all the deployments thrown in. It was hard leaving behind friends and family and starting over every couple years.

Early in their marriage, Francy resented some of these assignments and took it out on her husband, blaming him until she realized that soldiering is all he ever wanted to do in life. She was going to have to alter her perspective to be able to support him better.

Finally, Francy decided that if her husband was to be able to do what he was called and trained to do, she had to learn that his mission had to become her own. She believed in what he was doing, and she knew the only way he would ever be happy was for her to become adaptable.

Not being a natural extrovert, she learned to go out right away, make new friends and get involved in the community. She settled in faster and experienced a whole new state and/or country, which became an exciting adventure—especially when running marathons in each state became a new goal.

Francy became an expert in running marathons and created her own training system for leading the wives of Army personnel to run also. They all had the same challenges in making so many moves, and it brought them together.

Before long Francy had a whole wall of medals, so she decided it was time to train her parents! They could not run after 40 years of marriage and weight gain, so she helped them to walk a half marathon – the 13.1 miles – without stopping.

A race was coming to her city––the perfect opportunity to get her parents ‘in shape.’  Her parents complied and were glad to be part of their daughter’s world. They worked hard, but still didn’t see how they could finish the race with everyone else unless they ran it. So, Fran got permission for them to start earlier in the morning.

It worked, and they finished the race approximately the same time as all the rest finished the whole marathon. Of course, only one person received first prize in each age group, but they received a medal when they crossed the finish line. 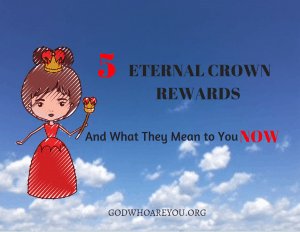 Much like a marathon, at the end of our race on earth, believers in Jesus Christ will receive eternal crown rewards when they make their Creator’s mission their own.

Much like a marathon, at the end of our race on earth, believers in Jesus Christ will receive eternal-crown rewards when they make their Creator’s mission their own. Do you know what they are?Click to Tweet

“For we must all appear before the judgment seat of Christ, that each one may receive the things done in the body, according to what he has done, whether good or bad” (2 Corinthians 5:10).

We must be clear on one point. Scripture does not say that a person is saved, or obtains eternal salvation because of his works, or what he does while in the body; it does say our works matter.

Ephesians 2:8-10 will always be our faith foundation: “For by grace you have been saved through faith, and that not of yourselves, it is the gift of God, not of works, lest anyone should boast. For we are His workmanship, created in Christ Jesus FOR good works, which God prepared beforehand that we should walk in them.”

As I live, says the LORD,
Every knee shall bow to Me,
And every tongue shall confess to God. Romans 14:11

In other words, we will all have to “give an account of ourselves to God” (Romans 14:12)––at one of two judgments.

[To understand more of what it means to be a Christian believer in Jesus Christ, click on these links to learn about HEART change and the what the BLOOD of Jesus Christ did for you.]

THERE ARE TWO JUDGMENTS

There will be two judgments: one for believers (the *Bema) and one for non-believers in Jesus Christ (the Great White Throne Judgment).

THE *BEMA JUDGMENT FOR BELIEVERS – CROWN REWARDS . . . OR NOT

1 Corinthians 3:11-15 tells believers that their works can be compared to gold, silver, precious stones, or wood, hay and straw. Each one’s work will be revealed by fire that tests each one’s work of what sort it is.

“If anyone’s work which he has built on it [the foundation of Jesus Christ] endures, he will receive a reward. If anyone’s work is burned, he will suffer loss, but he himself will be saved, yet so as through fire” (1 Corinthians 3:14-15).

THE GREAT WHITE THRONE JUDGMENT FOR NONBELIEVERS– NO CROWN REWARDS

Revelation 20:11-15 reveals what will happen at the Great White Throne Judgment for unbelievers. All the dead, small and great, from the sea, death and hell will be judged, “and books were opened. And another book was opened which is the Book of Life. And the dead were judged according to their works, by the things which were written in the books . . . And anyone not found written in the Book of Life was cast into the lake of fire.”

What are the books that were opened that were compared to the Book of Life? Read Psalm 139:

“Your eyes saw my substance, being yet unformed. And in Your book they all were written, the days fashioned for me, when as yet there were none of them” (Psalm 139:16).

All the days ordained for you were written in your book the moment you were conceived in your mother’s womb. This is God’s plan for your life, your destiny and your days numbered.

Everything about your life is recorded in your book, especially if you have chosen to believe in Jesus Christ and follow Him and have allowed Him to fulfill His plans for your life.

Believer’s crown rewards are determined from this book at the Bema Judgment. Believers take no part in the Great White Throne Judgment at the very end of time.

WHAT ARE THE FIVE CROWN REWARDS?

They are summarized below.

[I will write about each one of the following in the next five posts, so if you are reading this before completion, they will not be linked; otherwise, they are linked to more detail.]

1. Incorruptible Crown/Victor’s Crown – “Everyone who competes for the prize is temperate in all things. Now they do it to obtain a perishable crown, but we for an imperishable crown” (1 Corinthians 9:25).

3. Crown of Glory – “Shepherd the flock of God which is among you, serving as overseers, not by compulsion but willingly, not for dishonest gain but eagerly; nor as being lords over those entrusted to you, but being examples to the flock; and when the Chief Shepherd appears, you will receive the crown of glory that does not fade away” (1 Peter 5:2-4).

4. Crown of Righteousness – “There is laid up for me the crown of righteousness, which the Lord, the righteous judge, will give to me on that Day, and not to me only but also to all who have loved His appearing” (2 Timothy 4:8).

5. Crown of Rejoicing – “For what is our hope, or joy, or crown of rejoicing? Is it not even you [souls won] in the presence of our Lord Jesus Christ at His coming? For you are our glory and joy” (1Thessalonians 2:19-20).

(Other descriptive names given these crown rewards: 1. Victor’s Crown 2. Martyr’s Crown 3. Elder’s or Shepherd’s Crown 4. For Those Who Love His Appearing  5. Soul Winner’s Crown)

Notice that the Apostle Paul summarized the imperishable crown (#1), also called victor’s crown, in 1 Corinthians 9; still yet, all the crowns are also victor crowns for those who overcome. My next post will address the Victor’s Crown in detail as to how I can know I will receive it; what am I to do?

The following Scripture passage from 1 Corinthians 9:24-27 (NKJV) is merely an introduction to the incorruptible victor crowns:

• 24 Do you not know that those who run in a race all run, but one receives the prize? Run in such a way that you may obtain it.
• 25 And everyone who competes for the prize is temperate in all things. Now they do it to obtain a perishable crown, but we for an imperishable crown.
• 26 Therefore I run thus: not with uncertainty. Thus I fight: not as one who beats the air.
• 27 But I discipline my body and bring it into subjection, lest, when I have preached to others, I myself should become disqualified.

I RUN to receive crown rewards

Even though we may not come out first, we must run or walk very fast as though we will be first. Those of us who started out life earlier than most, will cross the finish line at the same time when the body of Christ is caught up together to meet the Lord in the air (1 Thessalonians 4:17).

For a visual of what this will look like, you may go HERE to listen to or read about the open vision the Lord gave me of what happened when the body of Christ RAN fast and faster.

I FIGHT to receive crown rewards

We must fight because we have an adversary (the devil). He does everything he can to keep us from fulfilling our destiny and what is written by our Creator in our own personal book. We must not allow him to cheat us of our reward (Colossians 3:18), or lose it by deception (2 John, vs. 8).

If we do allow this to happen, we stand the chance of losing our crown reward if we continue to let the enemy “take our crown” (Rev. 3:11). The thief does not come except to steal, and to kill and to destroy. Jesus has come to give us life and life abundantly (See John 10:10).

We must educate ourselves on how to use our spiritual word weapon, so we don’t just beat the air. This is what my next post will address in The Victor’s Crown.

I think we all know how hard discipline is. It takes a conscious decision to prepare for a marathon; even a half marathon of 13.1 miles. Likewise, to be a disciple of Jesus Christ requires discipline and a quality decision.

It’s not by chance that ‘disciple’ is the root of ‘discipline.’ And how we live our life on this earth affects everyone we know and possibly many we may never know. Will you receive a crown reward?

And behold, I am coming quickly, and My reward is with Me, to give to everyone according to his work (Revelation 22:12).

REMEMBER: TO PICK UP YOUR FREE PRINTABLE FOR FUTURE REFERENCE for the crowns >>>

*Bema is the transliteration of the Greek word used in the New Testament used to distinguish the Great White Throne Judgment of nonbelievers from the judgment seat of Christ for believers. A bema was a raised platform in the city square or at the coliseums where a dignitary would sit to hear civil matters or hand out rewards at competitive games (Tim LaHaye & Thomas Ice, Charting the End Times, Harvest House Publishers, p. 122.) 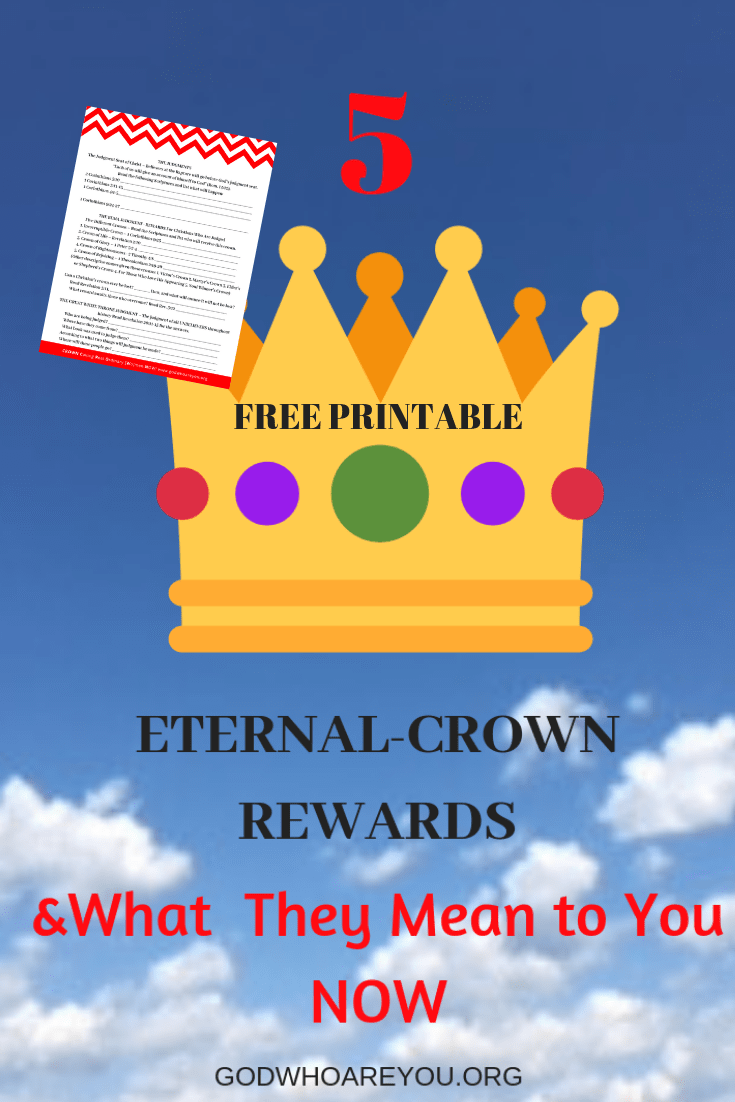