For your Maker is your husband, the Lord of hosts is His Name; the Holy One of Israel is your Redeemer, the God of the whole earth He is called.—Isaiah 54:5 Amplified

Your Maker Is Your Husband: Lord of hosts is His Name 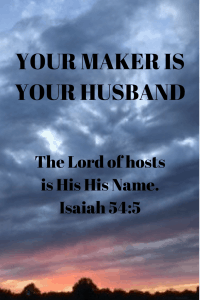 This whole Bible study explores twelve of the more prominent attributes of God that help us understand who He is. This one module addresses twelve attributes the Church must possess if she is to overcome and be given the “right to sit with [Jesus] on [His] throne, just as [He] overcame and sat down with [His] Father on his throne” (Rev. 3:21).

The Bible tells us “Your Maker is your husband, the Lord of hosts is His name” (Isa. 54:5). If He is our husband, then we must be His wife who will share His throne. Paul Billheimer writes in his book, Destined for the Throne, “The human race was created in the image and likeness of God for one purpose: to provide an eternal companion for the Son. After the fall and promise of redemption through the promised Messiah, Israel was born and nurtured in order to bring in the Messiah. And the Messiah came for one intent and only one: to give birth to His Church [believers] thus to obtain His Bride. The Church, then—the called-out body of redeemed humankind—turns out to be the central object, the goal, not only of mundane history but of all that God has been doing in all realms, from all eternity.”[1]

“From this it is implicit that a godly ‘romance’ is at the heart of the universe and is the key to all existence. From all eternity God purposed that at some time in the future His Son should have an Eternal Companion, described by John the Revelator as “the bride, the Lamb’s wife”[2] (See Rev. 21:9). We will be His Eternal Companion. In this module we will use the term bride—from the female point of view. The bride defined in Webster’s is a woman just married or about to be married; bridegroom defined the same way.

Sometime in the near future Jesus will come for His mature Bride. He does not want to marry an immature child, so He is willing to wait until she grows up. He is looking for those who have learned to overcome in His strength and power; thus, expressing His love— becoming as He is in this world.

This Bride exhibits an unshakable faith and determination as fulltime encouragers who worship and praise Him. He is looking for totally committed persons willing to spend time to know His mind through His Word. He is looking for—in the same persons—those who have dropped all excess baggage so they can fight the battles in the Promised Land Plan, and those whose trust—in Him and for one another—has matured. He is looking for those who have learned to respond rather than react, who communicate with Him about absolutely everything—including money—never trying to hide anything from Him. They cannot anyway. Their hearts are exposed so His love can flow through His royal red blood in them, reaching out to others. 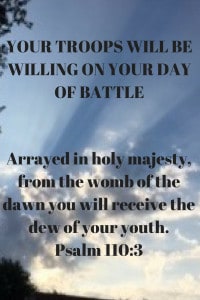 Our Heavenly Father, as Jehovah-Sabaoth, is looking for men and women who have learned to face where they came from so they can see where they are going in an interdependent relationship [marriage partnership] with His Son, Jesus Christ, right now on this earth. In other words, they know who they are—one with Jesus. Shortly before Jesus was crucified He prayed to His Father for his disciples and all future believers:

All I have is yours, and all you have is mine . . . I will remain in the world no longer, but they are still in the world, and I am coming to you. Holy Father, protect them by the power of your name—the name you gave me—so that they may be one as we are one . . . . My prayer is not for them alone. I pray also for those who will believe in me through their message, that all of them may be one, Father, just as you are in me and I am in you. May they also be in us so that the world may believe that you have sent me.—John 17:10-11, 20-21

This prayer of Jesus is no less than the traditional marriage pronouncement a minister gives the bride and groom after they have made their covenant vows of commitment. He says to them from Matthew 19:6, “‘[You] are no longer two but one flesh. What therefore, God has joined together, let man not separate’” (NASB). We have been made one in Jesus who was one in His Father through the Holy Spirit. He has given us His name in holy matrimony and is responsible for us, protecting us through the power of His name. He bought us for Himself with a great price by dying for us. He put a ring on our finger—a seal on our foreheads—“having this seal[3] the Lord knows those who are His” (2 Tim. 2:19; see also Rev. 9:4).

What does this mature bride look like who is still in the world—who proudly wears His ring and identifies with His name so that the world may believe? Three women, Barbara Watts, Pat Jessee, and Jo Anne Swezey, exhibit all the twelve attributes of the mature Bride. Although their stories are told in this chapter, it does not take away from the significance of other stories in this book. All are fully committed overcomers and reflect these values as well. These three women’s testimonies possess certain qualities in a more pronounced and easily discernable manner. However, before we look more specifically at the Bride, we need to understand just who Jehovah-Sabaoth is—the Lord of hosts.

Who is Jehovah Sabaoth [Lord or hosts]?

The queen, who will share the King’s throne and His glory, has faced Truth and is living before Him with clean hands and a pure heart, right now, along with those who have already gone before.

[3] In the Greek Dictionary of the New Testament found in Strong’s Exhaustive Concordance, seal means “to stamp for security and preservation; impressed as a mark of privacy, or genuineness,” p. 70.

GOD Who Are You? AND Who Am I? eBook – Leaving Bondage