HOW DO WE UNCOVER JESUS’ FEET?

Naomi knew Boaz, and that he was her next of kin. As was the custom of her people, a widow could marry the closest relative to keep the dead man’s name alive. She was that widow who could have claimed that right, yet she said, “I am too old to have a husband.” In our story, we are looking at Boaz-Jesus as that husband.

Naomi chose to live in her bitterness which made her unrecognizable to past friends after only ten years. She blamed God for her misfortune and chose to live her life through Ruth, without a direct relationship with her Redeemer.

Nevertheless, Ruth gained the attention of Boaz, who represents Jesus, “whose name is strength.” How did she do it? She watched for His Presence and, “bowed down with her face to the ground” before Him (Ruth 2:10). Later on, she approached quietly, and uncovered Boaz-Jesus’ feet. When we, like Ruth, lie at Jesus’ feet, we will see seven folds in His garment that the book of Ruth uncovers for us.

Naomi only made it back to Bethlehem, or “House of Bread.” Ruth was not seeking God’s hand; she was hungry for His face. She made a complete turn around to Judah, the land of “praise and worship.” Worship means utterly devoted admiration, or honor and respect. This is what she gave Boaz-Jesus.

Ruth recognized Naomi’s words to her as direction from the heavenly Shepherd of her soul, and she was willing to put down her pride to go to a place women never went, and by tradition were never to be found. She had to die to the labels other people had given her–– a foreigner—a Moabitess––a descendant of Lot and the incestuous relationship his daughters instigated with him after the destruction of Sodom and Gomorrah (see Gen. 19).

Ruth’s heavenly Shepherd directed her to the threshing floor where barley was sifted from chaff—where she found God. She had been sifted and shaken already, and it was here at the midnight hour that she asked Boaz-Jesus to marry her. This was her ultimate demonstration of love, devotion and commitment.

Worship is a way of life, a decision we make. It does not lie in mere words, but the action and direction in life we take. It is living what the Bible says, such as loving another as ourselves. Ruth had already made that decision in loving Naomi when she said she would never leave her, and where she died she would die. This and Ruth’s desire to know Naomi’s God and be a part of His people got Boaz’s attention. And, out of Ruth’s worship of God and love for Boaz, Obed was born—his name meaning “he who worships.”

Ruth had to wait in the dark hours of the night before Boaz acknowledged she was there, and after He did, she stayed. Likewise, when we are seeking and waiting upon the LORD, while in His Word, we are worshipping and lying at Jesus’ feet; He will let us know we have gotten His attention in a unique, personal way. The Shepherd’s directive to us is the same as given to Ruth: 1) note the place where He is and be a part of it, 2) uncover His feet, and then, 3) He will tell you what to do. Have you staked your position at the feet of Jesus?

In the book named for her, Ruth was referred to as “Ruth the Moabitess” five times. “At midnight, the man was startled, and turned over, and behold, a woman lay at his feet! And he said, Who are you?” (Ruth 3:8-9 Amplified).

“I am Ruth your maidservant. Spread your wing (of protection) over your maidservant, for you are next of kin” (Ruth 3:9 Amplified). She finally saw herself as His handmaiden, bound by love—Ruth meaning “something worth seeing.”

Before this, Ruth had said to Boaz that she saw herself as not being as good as one of his other servant girls (see Ruth 2:13). After she swallowed her pride to go to Him, on that threshing floor at harvest time, she found herself in the Throne Room of God where her Redeemer lived. She was accepted just as she was, and God transformed her in the process.

What Ruth did not know was that Boaz was also a “foreigner.” His mother was Rahab (see Matt. 1:5), the prostitute and citizen of Jericho, who hid Caleb and Joshua and helped them escape death. It was by a scarlet cord Rahab tied in her window, signifying the blood of the Lamb [born of a virgin], that saved the lives of her family—and now, the royal red blood line found its way to Ruth. Do you know who you are? Have you positioned yourself long enough in the Throne Room at Jesus’ feet to allow His blood to cleanse and transform you? 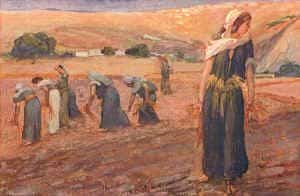 Boaz said to Ruth, Listen, my daughter, do not go to glean in another field, or leave this one, but stay here close by my maidens (Ruth 2:8 Amplified).

Boaz-Jesus told Ruth to stay close to His other servants who already knew Him. When she did, she learned from them, and she discovered she was exactly where she was supposed to be. Later, she realized she had been under God’s protection and care all the time.

Boaz-Jesus said, “Listen. Look at Me. Hear Me. See Me. Don’t leave Me. Don’t go glean in another field.” Two disciples discussed the crucifixion of Jesus on the road to Emmaus. As they were discussing, Jesus himself showed up and asked them what they were talking about. They recounted all the recent events including how their women amazed them. They said, “They came and told us that they had seen a vision of angels, who said he was alive. Then some of our companions went to the tomb and found it just as the women had said, but him they did not see” (Luke 24:23:24).

Jesus rebuked the men for not believing the women, “How foolish you are, and how slow of heart to believe all that the prophets have spoken! Did not the Christ have to suffer these things and then enter his glory?” (Luke 24:25-26).

After arriving at the village, Jesus ate with the men. Upon breaking bread, as He had always done with them, their eyes were opened and they recognized Him. “Were not our hearts burning within us while he talked with us on the road and opened the Scriptures to us?” (Luke 24:32).

We must make the time now to do it for ourselves by falling on our face before Him and staying at His feet, asking Him to remove the wedding veil from our eyes. He will then open the Scriptures to us personally.

It was after that, Boaz told Ruth, “I will do for you all you ask.”

Jesus said, “If you make yourselves at home with me and my words are at home in you, you can be sure that whatever you ask will be listened to and acted upon” (John 15:7 The Msg).

Being in His Word is the only way to know the Redeemer. He is the vine and we are the branches. Apart from Him we can do nothing. Have you been meditating upon the Scriptures throughout this study? If so, you have been in the Throne Room of Jehovah. Have you come to the point of knowing Him by His name, and therefore, to know what to ask of Him?

4. Know the Times in Which We Are Living—End Times

The whole book of Ruth is a blueprint for our time. The King James and Amplified versions say Ruth approached Boaz “at the midnight hour,” meaning at the end of the age. About His coming, Jesus tells us, “Therefore keep watch, because you do not know the day or the hour” (Matt. 25:13). Does this mean if we do keep watch we will know the day and hour? Probably not, but we can know the season, and the body of Christ will be pulled together as one body, probably not in agreement on all counts, but all with their eyes on the LORD and watching for His return—while in motion.

Mark Hitchcock has written a small, concise book of about 100 pages that gives an easy to understand summary of Seven Signs of the End Times. He says, “Our world today looks strikingly similar to the one pictured in the Bible in the end times. And the picture continues to develop and become clearer and clearer.”[1] A summary of these seven signs are:

This seventh sign affects each of us most directly, therefore, is the most disturbing. Mark Hitchcock writes, “More and more churches today are awash in a watered-down, doctrineless, soft-pedaling, anything-goes, pop psychology, don’t offend-anybody, entertainment-oriented, permissive quagmire . . . . Many . . . deny the virgin birth of Christ, the sinlessness of Christ, the inerrancy [free from error] of Scripture, the atoning death of Christ for sin, the bodily resurrection of Christ, the necessity of personal faith in Christ for salvation, and the second coming of Christ to earth as King of kings and Lord of lords.[2]

Matthew, Chapter 24, is a whole chapter where Jesus gives us signs of the end of the age. He details signs of dark distress as birth pains that intensify until the days are shortened for the sake of the elect (see vs. 22). This time can be likened to the threshing floor in the time of Ruth.

Jesus says, “When you see all these things, you know that it is near, right at the door. I tell you the truth, this generation will certainly not pass away until all these things have happened” (Matt. 24:33-34).

The apostles and the church of the first three centuries wholeheartedly expected Jesus to return for His bride during their lifetime, but only now have all the prophecies lined up so it can happen; only now has the Lord opened up His Word to be fully interpreted—which is also a fulfilled prophecy (see Daniel 12:9). Additionally, only now have we witnessed the blindness coming off the eyes of the Jewish people to recognize Jesus as their Messiah. Of all the prophecies being fulfilled today, this is the most amazing and important of all.

More Jews have come to know the Lord in the last four decades, since Jerusalem was established as the capital of Israel in 1967, than in the previous eighteen hundred years put together.

With satellite and cable television bringing the Gospel into the land of Israel, thousands are coming to their Messiah today. We are the most privileged generation of all time to see these prophecies fulfilled before our very eyes! Romans 9:27-28 tells us that when this happens, it will be a quick work and will be cut short in righteousness. Sid Roth, Messianic Jew and television host of It’s Supernatural, says, “We are in prophetic crunch time. Everything is speeding up!” His show alone is aired in Israel 33 times a week! Are we aware of this? (Read these important Scriptures: Zechariah 2:8, Daniel 12:4, and 12:10; Romans 11:25-27 and Luke 21:24).